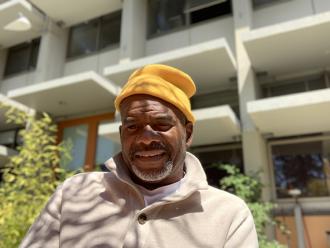 Fred DeWitt is a Master of Fine Arts student and the first artist-in-residence in the Department of Art Practice at UC Berkeley. DeWitt, 61, shares in his own words what the Black Panthers meant to him as a young boy growing up in the Bay Area, how Barack Obama’s election as president inspired him to go back to school to study art, and the complicated nature of honoring the lives of people who never wanted to be remembered for their deaths. His MFA show will be at the Berkeley Art Museum and Pacific Film Archive (BAMPFA) in June.

Narration: Fred DeWitt is a Master of Fine Arts student and the first artist-in-residence in the Department of Art Practice at UC Berkeley. Whether he’s sculpting a gigantic shoe from clay — George Floyd’s shoe, he says, a heavy shoe that nobody wants to wear — or he’s growing cotton plants in the department’s new Platform Artspace, DeWitt wants his art to get inside people’s minds and hearts and encourage them to recognize the humanity in everyone.

Fred DeWitt: I grew up right around here in Berkeley. I’m from B-town. Berkeley High Yellowjackets. I ran track at Berkeley High School. We would run up the street to UC Berkeley and up to the fire trails every day. I ran the 400 meters. Yeah, I ran that, and I ran the relays. My father was actually a state champion. He won the state meet (in 1957) at Edwards Stadium down there, in Berkeley. So, you know, Berkeley always represented a special place for me. I’m talking about UC Berkeley, it was always a very special place for me.

I was a child in the ‘60s, I grew up mostly in the ‘70s. In those days, people chose to be there not only because of economics, but because of freedom. They wanted to come to California and have a new experience in life. California has always kind of represented free spirit. People were coming from other parts of the country and other places in the world to be themselves. When they couldn’t do that in the Midwest or the East, they felt constrained, they could come here to San Francisco, to Berkeley, to Oakland and discover new things and find out who they were.

[Audio clip: Historical footage and interviews with Black Panthers KTVU Fox 2 San Francisco: “Let’s get into the inner workings of this. Let’s get into the inner workings of a Black revolution and why Black people have a right to take what’s theirs. You can read the platform in the program. It’s a basic program. And it simply says exactly what Black people have been crying for for 400 years: 1. We want freedom. We want the power to determine the destiny of our own Black communities.”]

They seemed to have a certain sense of pride about themselves. They talked about community — they had the free breakfast program, and they had their own schools. And they had cool leather jackets.

One day, I saw Obama come into the Santa Monica airport. Forget about the politics, that was cool. I had to look at myself in the mirror and say, “Hey, Fred, what can you do?”

I never thought I’d see a Black man be the president in my lifetime, and I had to go home, and I had to say, “What can you do to help your country and your community? How can you step up?” I’m a person with a disability. I can’t use that as an excuse. I’m old and Black. I can’t use that as an excuse. I said, “I can go back to school. I can learn to paint and draw and do all those things that I wanted to do. I can step up and help my community as a teacher.”

But then, when Obama was in office, Trayvon Martin got killed. And my girlfriend at the time, she had a disabled son — he has autism — and we were terrified. He didn’t know how to raise his hands if you said, “Stop, don’t do that!” He really wouldn’t know what was going on, right?

So, I really started painting things from my childhood and painting things that really resonated with my own life. I started talking about violence against the Black body. Blues artists, they sing it out, they play it out. I try to paint it out.

I have a painting of Trayvon Martin (“The Witness”) that I had in my first MFA show here that really means a lot to me. He’s camouflaged in the painting. I’m talking about that violence, but I have to camouflage it in some kind of way — with flowers and other things, other objects are in there. At the base of the painting I put some Skittles, because Trayvon Martin went to the store and got Skittles and iced tea. It represented… kids eat that, this kind of youth. But it also represented the whole history of sugar production and slavery. Why can’t young Black boys be boys? Why do they have to be treated as men, seen as men, when they’re children?

When I got to Berkeley (in 2019), they said, “Do everything but paint.” They said, “You know how to paint, now what are you going to do?” So, I started off growing cotton plants, but now I’ve shifted, and I grow some other kinds of plants — some plants that mark the resistance of Black people. We’ve been in this country for 400 years.

So, I’m growing some corn and tomatoes and sweet potatoes and black-eyed peas and okra to mark that resistance in this kind of evolution.

And I made some sugar bowls that kind of talked about the whole sugar production and the slave trade. I made a fountain, a slave ship fountain. And I made a gigantic shoe: the George Floyd shoe (“Brother Floyd’s Shoe”). That’s a gigantic shoe that you don’t want to wear. Nobody wants to be the martyr, nobody wants to put those shoes on of those people, right? So, I made a gigantic, heavy shoe that no one would want to wear.

When I was a kid, I believed there was going to be a revolution, even though I didn’t know what a revolution was. But I thought things were going to change. But we see that things, they’ve shifted. I’m not sure they’ve changed.

[Audio clip: Black Lives Matter Protests Around the World by Great Big Story: “It’s alright to be angry (cheers) … Turn it into indignation. Turn it into energy. (Chanting) What’s his name? George Floyd! What do we want? Justice!”]

What we want is freedom. All we want is to not be brutalized. No one hates the police. That’s not it. We hate the brutalization. The oppression is what we hate. That’s what people are marching for. Recognize that we all are human beings. We all deserve respect and dignity.

What we want is freedom. All we want is to not be brutalized. No one hates the police. That’s not it. We hate the brutalization. The oppression is what we hate. That’s what people are marching for.

[Audio clip: Black Lives Matter Protests Around the World by Great Big Story: (Chanting) “What do we want? Justice! When do we want it? Now!” (Speaker) “Let’s stop hurting each other and let’s get it right, man. Today is the day we’re going to stand up for our community, man. If we can do this, we can do more. We just gotta continue on pushing and not give up.” ]

One of my most recent paintings is of Breonna Taylor (“The Bedroom”). It’s kind of… lovers in the bedroom and protest. These people never wanted to be there. They never wanted to be in my painting. They’re there, but they’re not there. I try not to paint them, they’re not exactly figurative paintings. They’re more abstract in nature. So, all these paintings, they mean a lot to me, in general, right? But also, they mean a lot to the world, I think.

Those faces you see up on all the billboards, those names you hear repeated, they are marking our time here. They’re marking this spot. Now, what will come after this? I don’t know, but I hope we can have some semblance of freedom in the future. That we don’t have to keep over and over and over again talking about Trayvon Martin and George Floyd and Breonna Taylor. .

That maybe we can get to a place where that will be past history. The things I’m painting will be history, right? They won’t be this contemporary stuff that’s happening right now. They won’t be news.

I started doing my own research. I started doing genealogy research and I saw the way they used to mark African graves. They would just break a plate to mark that as a grave site. And the plates that are actually seed bombs, so when they break and they decompose, things will grow. From the destruction, life will come.

But, also, they will free some of these spirits up. The breaking of those plates will free Breonna to fly. Free George to move on. Let Trayvon Martin rest. And still, we have something growing.

Art is part of the culture, right? And so, those things have to be there to illuminate what’s happening in society. And I think that art used as a tool to heal and promote social equality is important.

[Music: “For We Shall Know Speed” by Blue Dot Sessions]

They can make you feel good inside, too. They can question society, question these structures, but they can also be beautiful. And you can enjoy them. You can surround yourself with them, and you can be healed. I think art does have a role to play, and artists have a role to play. If we get artists looking inside at themselves and reaching out to other artists and reaching out to society, the world would be a better place.

Narration: This is Fiat Vox, a Berkeley News podcast. I’m Anne Brice. You can subscribe to Fiat Vox, spelled F-I-A-T V-O-X, wherever you listen to your podcasts. For more episodes, visit our podcast page on Berkeley News at news.berkeley.edu/podcasts.

Read more about DeWitt in a Q&A on the art practice website and find more photos of his artwork on his Instagram page.
See the Berkeley MFA show schedules for the classes of 2020 and 2021 on BAMPFA’s website.