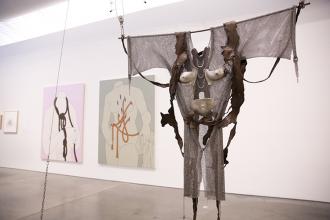 When Julie Rodrigues Widholm joined the Berkeley Art Museum and Pacific Film Archive (BAMPFA) as director in August 2020, she didn’t know that she’d have to wait nine months to reopen the museum’s doors. Although she and her staff found ways to provide the community with online art experiences, she says, there’s nothing like visiting a museum in person.

“It feels like the beginning of a very exciting time after a year that was very challenging,” said Widholm. “Looking at art in person, being together in person, it’s just so important to have that human connection.”

On Saturday, Aug. 28, the community is invited — with free admission — to the opening of New Time: Art and Feminisms in the 21st Century, a multi-gallery landmark exhibition that features nearly 150 artworks by more than 75 artists and collectives of all generations that explore the nature of feminist art today.

“What I think is prescient and important about this exhibition is how it addresses the notion of feminisms, plural,” said Widholm. “I think that’s incredibly important in this moment, in particular, to think about intersectional feminism, different types of feminism, and to open up the conversation around, historically, what the term ‘feminism’ has meant, but also what it can mean in the future.”

When visitors walk into the lobby, they’ll first see a wall of posters by the Guerilla Girls, a group of anonymous feminist activist artists dedicated to fighting sexism and racism in the art world — while wearing gorilla masks. They launched their first campaign in 1985 in response to an international art show at the Museum of Modern Art in New York City that featured work by 165 artists, of whom only 13 were women.

Wildholm said that seeing an artwork on a computer screen, as most of us have been doing this past year, doesn’t compare to standing in front of it, where we can experience the scale, texture and surfaces that don’t translate onto the screen.

“Often, when you’re looking closely at an artwork, you can see the artist’s gesture, or you can see how carefully they crafted this work,” she said. “To me, it’s about the human presence that was involved in making the work. You’re sharing the space with the artist by being in the same space as the artwork and the objects.”

BAMPFA is also holding free documentary showings on its outdoor screen on Addison and Oxford streets. Sisters with Transistors, about nine women who broke barriers in music, technology and society as a whole, will be shown Thursday, Aug. 26, at 7 p.m. And Crip Camp: A Disability Revolution, about how a 1971 summer camp for disabled teens helped spark a civil rights movement for people with disabilities, will be shown on Sept. 9.

New Time opens on Saturday, Aug. 28, 2021, and runs through Jan. 30, 2022. On Friday, Aug. 27, BAMPFA members and UC Berkeley students, staff and faculty are invited to attend a free preview day of the exhibition.