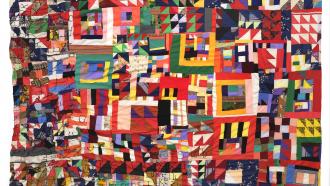 Rosie Lee Tompkins: A Retrospective, now on display at BAMPFA in Berkeley, marks the largest and most comprehensive exhibition ever presented of the work by this celebrated artist, one of the most inventive quilt makers of the late 20th and early 21st centuries. In fact, Tompkins’ stature in the art world is so high that her oeuvre is now considered one of the remarkable American artistic achievements in any medium.

Virtuoso quilt maker Rosie Lee Tompkins (a pseudonym of Effie Mae Howard) was born in Arkansas in 1936 and died in 2006. She lived in Richmond, California, had no formal quilting training, except at her mother’s knee, and did not begin quilting seriously until the 1980s.

Her gorgeous quilts are made from a variety of new and recycled fabrics and clothes of cotton, artificial fur, denim, various glittery materials and many in luscious velvets. Tompkins used a wide variety of traditional patterns, including half-squares, medallions and yo-yos. She was inspired by her spirituality and desire to honor family members. She frequently stitched words and citations of Christian scripture on her quilts, used pre-printed images, and also included commentary on contemporary social, political and cultural events. The use of repeating colors and alternating patterns gives her quilts an inclusive artistic balance and a beautiful, often dramatic, cohesion.

This extraordinary exhibition features not only many of Tompkins’ remarkable and imaginative oversized quilts, but also pieced tops, embroideries, assemblages and decorated objects. Tompkins often used other quilters to sew her patterned top quilts to their backings, and those artists are given credit in the show, as “Quilted by …”

How Tompkins’ quilts came to BAMPFA is a fascinating story in itself.

Tompkins was selling her quilts at the Alameda flea market when North Oakland psychologist Eli Leon (1935-2018) first saw them. Leon, originally from a Bronx, N.Y Jewish family, was so taken with her work that he bought all her quilts, and continued to buy them until her death — a total of 500, the vast majority of Rosie Lee Tompkins’ total body of work. Leon became a close friend and early champion of the very private Tompkins and organized one of the first exhibitions to feature her quilts, at the Richmond Art Center. He also worked with BAMPFA’s director and chief curator, Lawrence Rinder, to arrange Tompkins’ first solo exhibition in 1997.

Leon spent more than 30 years as a collector and scholar of African American quilts and assembled his own collection of about 3,000 quilts by 400 different 20th-century quilt makers. Unbeknownst to BAMPFA, upon Leon’s 2018 death, he left his entire collection to the museum.

With this transformative gift, BAMPFA is now a leader in the field of African American art, with perhaps the most extensive public collection of African American quilts in the world. BAMPFA is already preparing its 2022 quilt exhibition, which will highlight the entire collection with works by Tompkins as well as by many other prominent artists, including Sherry Byrd, Willia Ette Graham and Arbie Williams.