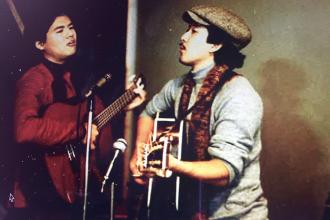 How the Asian American movement began at Berkeley, sparked creativity and unity

In the second part of a three-part series, playwright and UC Berkeley professor Philip Kan Gotanda discusses how he began to write music during the emerging Asian American movement, which began at Berkeley in the late 1960s. And how, after his music career didn’t take off as he’d hoped, he went to law school, where he wrote his first play. Now, he’s one of the most prolific playwrights of Asian American-themed work in the United States.

Read a transcript of Fiat Vox episode #76: “Playwright Philip Kan Gotanda on how the Asian American movement inspired his work.”

[Music: “A Rush of Clear Water” by Blue Dot Sessions]

In the last episode, playwright and UC Berkeley professor Philip Kan Gotanda shared what it was like growing up in Stockton, California, as a Japanese American after World War II.

Philip Gotanda: I had all this, basically, internalized racism, self-hate, you know, which was not uncommon at that time if you weren’t white. In particular, if you were Asian. You didn’t want to be Asian, you didn’t like being Asian, you didn’t hang with Asians because it was uncool, in my generation.

Today, in the second part of a three-part series, Gotanda discusses how he began to write music during the emerging Asian American movement, which began at Berkeley in the late 1960s. And how, after his music career didn’t take off as he’d hoped, he went to law school, where he wrote his first play.

Now, he’s one of the most prolific playwrights of Asian American-themed work in the United States.

In middle school, 13-year-old Philip Gotanda started a band. But instead of doing cover songs, like most teenage bands were doing at the time, Gotanda wrote all of his own music.

Philip Gotanda: And that was kind of how my own personal esthetic has evolved, where I take an interest in something, and I actually may not know how it works yet, but I’ll kind of dive into it and, on the way, figure out how to make it work. You know, early on, I wanted to write about being Asian American. It was dovetailing with the movement that was happening in the world. The Asian American Movement had a cultural component. So, I began writing songs about being an Asian American and was trying to make a career out of it.

Here he is singing “Ballad of the Issei” with David Henry Hwang on violin. (Issei is a term for a first-generation Japanese immigrant.)

[Music: “Ballad of the Issei” by Philip Kan Gotanda (feat. David Hwang)] (Violin music) Singing: “Zen is when the wind, it bends the willow. But I dream that I can move the stars. As I finger pick my way to freedom, yes I do. On the ghost of Mr. Yamaha’s guitar.”]

In 1968, two Berkeley Ph.D. students, Yuji Ichioka and Emma Gee, needed a name for their organization aimed at increasing the visibility of activists of Asian descent alongside the growing political activism of the time: protests opposing the Vietnam war and supporting farmworkers, and the free speech and civil rights movements.

From this alliance grew the worldwide Asian American Movement.

Here’s musician Joanne Nobuko Miyamoto talking about the movement on the PBS series “Asian Americans episode 4: Generation Uprising”: (Music) “It was the first time the voices of Asian people of our generation were coming out. It was like a genie coming out of a bottle — you couldn’t put us back in. You can’t just have a leaflet. You can’t just have a demonstration. The art gives flesh and blood to the politics. People were drawing. People were making posters. People were making films. ”

Gotanda continued to perform his own music in San Francisco and Los Angeles. But after a few years, his music career wasn’t as successful as he’d hoped, so he decided to go to law school.

During law school at Hastings College, Gotanda wrote his first play — a musical called The Avocado Kid, based on a classic Japanese children’s tale. After he graduated and was studying for the bar exam, a small theater in L.A. — East West Players, the nation’s first professional Asian American Theater company — said it wanted to stage his play.

And so, I was writing both music, as well as theater. The idea for me was finally, finally I found that I did have a story. You know, with this face, with this body and with this embodiment of history — that I can now write about that in all these stories that haven’t been told.

[Music: “Ballad of the Issei” by Philip Kan Gotanda: (Singing) “I will sing a story about the grandeur and the glory. About the ones who wrote my song without foresaking…(Music fades)]

It’s a message that Gotanda hopes his students at Berkeley take away from his classes — that each of them has an important story to tell.

In the last episode of a three-part series, Gotanda discusses today’s surge in anti-Asian racism — something he thought was in the past — and how the Department of Theater, Dance and Performance Studies is joining the systematic shift that Gotanda sees happening across the country. We’ll also hear from a student of his, Wesley Tam, about how Gotanda’s Asian American theater workshop inspired him to start the ARC Repertory Theatre on campus.

This is Fiat Vox, a Berkeley News podcast. I’m Anne Brice. You can subscribe to Fiat Vox, spelled F-I-A-T V-O-X, wherever you listen to your podcasts. For more episodes, visit our podcast page on Berkeley News at news.berkeley.edu/podcasts.