Writer Joan Didion is a legendary voice of the American 1960s. Her collection of essays in Slouching Towards Bethlehem (1968)—written while living in Berkeley—is one of the best-known books of the period. Non-traditional journalism mixed with a “cool” autobiographical edge has made Didion’s work, from Play It As It Lays (1972) to A Year of Magical Thinking (2005), has made her a staple of American literature. In 2007 Didion was awarded the Medal for Distinguished Contribution to the American Letters from the National Book Foundation and in 2013 received the National Medal of Arts from President Barack Obama. 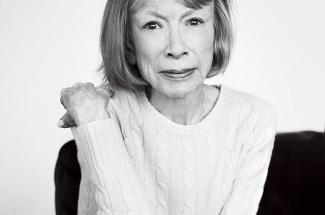