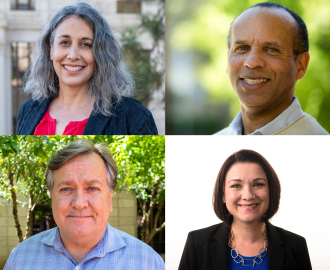 Pulitzer Prize–winning investigative reporter Geeta Anand joins a panel of fellow journalists and communication professionals, including UC Berkeley professors David Thigpen, David Barstow, and J-School alum and White House correspondent for National Public Radio Tamara Keith for a conversation about journalism in the wake of the presidential election. As priorities at the national political level shift before the new term starts in January 2021, panelists discuss the national agenda and its impact on California.

Geeta Anand is a Pulitzer Prize-winning journalist and author who serves as dean and professor at Berkeley Journalism. Her stories on corporate corruption won the Wall Street Journal a Pulitzer Prize in 2002, and she was lead reporter in a series on healthcare that was a finalist in 2003. She wrote the non-fiction book, The Cure, about a dad’s fight to save his kids by starting a biotech company to make a medicine for their untreatable illness, which was made into the Harrison Ford movie Extraordinary Measures in 2010. She worked as a journalist for 27 years, most recently as a foreign correspondent for The New York Times and the Wall Street Journal in India. She began her career at a free weekly newspaper, Cape Cod News, and then covered local government and courts at the Rutland Herald in Vermont. At her next job at the Boston Globe, she served as City Hall bureau chief and then covered the Massachusetts State House. She spent the next 17 years as a reporter and senior writer for the Wall Street Journal, where she covered the biotech beat and focused on investigative reporting. She spent nearly a decade in India, the country where she was born and raised, first as a foreign correspondent for the Journal and then The New York Times.

David Barstow is the Reva and David Logan Distinguished Chair in Investigative Journalism at UC Berkeley’s Graduate School of Journalism and leads the Investigative Reporting Program. Barstow was a senior writer at The New York Times and the first reporter to ever win four Pulitzer Prizes. Barstow joined The Times in 1999 and he has been a member of the paper’s Investigative unit since 2002. He is the recipient of three Polk Awards, the Goldsmith Prize, the Alfred I. duPont Silver Baton, the Barlett and Steele Gold Medal, a Loeb Award, the Sidney Hillman Award, the Daniel Pearl Award for Investigative Reporting, two Sigma Delta Chi awards for distinguished service, the Peabody Award, the Investigative Reporters and Editors Award, the Mirror Award, an Overseas Press Club Citation, two Society of American Business Editors and Writers awards, and the Gold Keyboard.

Before joining The Times, he reported for The St. Petersburg Times (now the Tampa Bay Times) in Florida, where he was a finalist for three Pulitzers. Before that, he was a reporter at The Times-Union in Rochester, N.Y., and The Green Bay Press-Gazette in Wisconsin. Barstow is a native of Concord, Mass., and a graduate of Northwestern University, which honored him with a Distinguished Alumni Award in 2010. He was inducted into the Hall of Achievement at the university’s Medill School of Journalism in 2015.

David Thigpen is curriculum designer and director of Berkeley’s new undergraduate journalism program. He is a former Time Magazine reporter who reported for the magazine from New York and Chicago, writing about Wall Street, popular music, and Chicago politics. His work has also been published in Rolling Stone and the New York Times. In 2018 he served as acting editor of The Chicago Reporter. David is also a public policy researcher and board member affiliated with the Institute for the Future in Palo Alto, California.

Tamara Keith ('01) is a White House correspondent for National Public Radio and co-host of the NPRPolitics Podcast. On Mondays she joins the PBS NewsHour for its weekly Politics Monday segment. Ms. Keith previously covered Congress and business for NPR and before that worked at member stations KQED, KPCC and WOSU.

For the most up to date information, visit artsdesign.berkeley.edu.