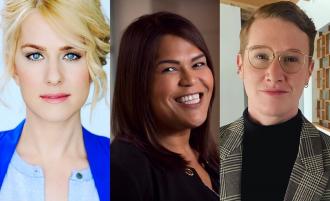 What are the latest developments in transgender public policy and health? Two leaders in these fields, Clair Farley and Jenna Rapues, share professional and personal insights and perspectives on current thinking and strategies. Moderated by Mere Abrams, their conversation will address trans rights locally and nationally, including priorities for the new administration, and building trans-inclusive capacities for systems of care.

Among questions they will consider are: What strides have been made in the last 20 years and what challenges have not been addressed? What role do policy and healthcare have in addressing the startling levels of violence and discrimination faced by trans people, especially BIPOC trans women? How is San Francisco modeling what it looks like to provide the trans community with legal protections, services, and resources?

Farley is Senior Advisor to San Francisco’s Mayor London Breed and eDirector of the San Francisco Office of Transgender Initiatives, the first and only trans led city department in the US. She has worked for over a decade advancing LGBTQ equity and economic development programs. Awarded the Outstanding Voice Award from San Francisco Business Times, Farley was recognized as a “Soldier of Social Change” by San Francisco Magazine’s annual Women in Power issue. Her story and work have been shared in several award winning films such as Red without Blue (Amazon) and American Transgender Nation (NatGeo).

Rapues is currently Program Director of Gender Health SF at the San Francisco Department of Public Health. Formerly she was the Interim Director of UCSF’s Center of Excellence for Transgender health. Rapues, who holds a Masters of Public Health from San Francisco State University, is a leader in public and transgender health in government, research, academic and public health institutions. In 2019 she received an Outstanding American By Choice award from Congresswoman Jackie Spier.

Abrams (moderator) is a researcher, writer, consultant and licensed clinical social worker in the fields of gender, sexuality, and health. They are the former Associate Director of Clinical Research and the Director of Community Engagement at UCSF’s Child and Adolescent Gender Center. Their work has been featured in publications such as Healthline Media and the Journal of Adolescent Health, and various outlets including NBC News.