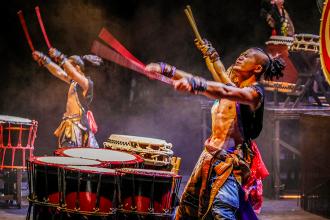 Off the screen and back in person: Cal Performances presents its new season

When Jeremy Geffen joined Cal Performances as executive and artistic director in April 2019, he had an idea about what his first season with UC Berkeley’s performing arts presenter — the largest in Northern California — would be like.

“I envisioned that I would be seeing how things ran and learning about Cal Performances’ audiences through a season that had already been planned, “ he said. “And, of course, that was not meant to be.”

Geffen had been on the job for only 11 months when COVID-19 swept across the state and campus events — including all performances — were moved online. And Geffen was presented with an unusual challenge: How would Cal Performances bring its audiences its world-renowned programming, but from a distance?

Instead of cancelling the season, Geffen and the Cal Performances team started Cal Performances at Home — a series that allowed audiences to stream newly produced, full-length music and theater performances from stages around the world.

“It’s been fascinating,” said Geffen. “Something that surprised me was how often audience members said they enjoyed the intimacy of a digital performance. It was a way of providing artistic sustenance to people when they weren’t getting it otherwise.”

All that said, Geffen is elated that, after more than a year of presenting online events, Cal Performances is back this fall with a slate of in-person performances.

Following a special performance in August, the 2021-22 Cal Performances season will begin on Oct. 3 with a recital by violinist Tessa Lark and pianist Amy Yang. (Lark opened last season’s Cal Performances at Home, but this will be her first time on stage in Zellerbach Hall.)

On Dec. 2, Kronos Quartet and expatriate Iranian vocalist Mahsa Vahdat will perform Placeless, marking the first performance of Illuminations: Place and Displacement, a series of five performances that explores the “fraught and often devastating effects of migration, exile, dislocation and separation on both hyper-local and international scales.” Illuminations also teams up with departments and disciplines across campus to hold conversations and events open to the public.

On Feb. 17, a wife and husband duo — vocalist Alicia Hall Moran and pianist and composer Jason Moran — will perform Two Wings, which chronicles the Great Migration of 6 million Black Americans from the rural South to cities in the Northeast, North and West, by tracing the history of the Hall and Moran families throughout the 20th century.

“They’re a wonderful couple, but an equally wonderful artistic pairing,” said Geffen. “Jason is one of the greatest jazz musicians in the world — he lives in the space between premeditated and improvised music. Alicia is a wonderful singer, and she has an unusual imagination for storytelling.”

Four-time Grammy Award winner Angélique Kidjo is Cal Performances’ first season-long artist-in-residence. The French-Beninoise singer, named one of “The 100 Most Influential People of 2021” by Time magazine and called “one of the greatest artists in international music today” by the BBC, will be visiting the campus twice — first, to perform her take on the Talking Heads’ Remain in Light album in October; then, returning in April with a musical theater production and Cal Performances co-commission, Yemandja, set during slavery in 19th-century West Africa. During both visits, Kidjo will work with students, faculty and campus partners in a series of community engagements.

For Geffen, the return of an in-person season means that Cal Performances’ audiences can once again come together — something that can’t be replicated in a virtual performance space.

“I’m so grateful for the joy that they’re going to experience,” said Geffen. “What you see on stage is a representation, a distillation and idealization of the human experience. It’s aspirational. It’s meant to strike a chord within the listener and the viewer. I hope they know that these months of deprivation have actually allowed us to go to a different place as audience members and to value the unknown people who sit alongside them.”

And as for the performers? Geffen said an audience’s presence and support allows them to take risks and go places in their artistry that they never could behind a screen.

Cal Performances will require audience members to wear masks and to provide proof of full vaccination to attend events. Find details and updates on Cal Performances’ reopening plans and requirements.