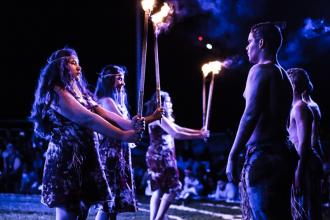 In summer 2019 Miriki Performing Arts from Australia and the Northern Pomo Dancers from California came together on the UC Berkeley campus on the Memorial Glade to build a bridge across the Pacific Ocean and raise awareness about two of the world's oldest living cultures. The event was co-hosted by the Department of Theater, Dance and Performance Studies at Berkeley, the Australian Government’s Regional Arts Fund through Regional Arts Australia, the Australia Council for the Arts, and the Embassy of Australia in Washington, D.C. A group of some 40 dancers ages 7 to 70 performed a series of stories that explored the relationship of fire between the Yidinji Nation from Cairns, Australia, and the Northern Pomo Tribe from the Redwood Valley Rancheria, in California. The performance was called Bayal Kaymanen, which translates to “Dancing Smoke” (“bayal” means “fire and smoke” in the Yidinji language, and “kaymanen” means “dance” in the Pomo language).

Director of Miriki Performing Arts (Pauline Lampton), co-founder of the Sogorea Te’ Land Trust (Corrina Gould), and Northern Pomo Dancer (Erica Estrada) will participate in a panel discussion on the role of cultural exchange on the UC Berkeley campus, a campus that obtained its land through the Morrill Land-Grant Act and resides on the Ohlone Homelands in Huichin. Bayal Kaymanen is part of a tradition of honoring native sovereignty and building global networks of kinship for people who continue to endure the colonization of their lands. Excerpts from a documentary about the project will be shared during the panel discussion.

Presented by UC Berkeley’s Department of Theater, Dance, and Performance Studies and the Berkeley Center for New Media.

Lampton is a descendant from the clans and nations of Tweed River-Bundjalung and Mununjali-Yugembeh and a descendant from the Wiangumban tribe of North Tanna Island, Vanuatu. Pauline is an alumni of NAISDA and has since worked with many Indigenous and non-Indigenous choreographers and independent artists within Australia for a little over 25 years.

Through her work, Pauline has established a methodology, process and approach that is both culturally safe and engages the performing arts as a powerful platform which can bring healing to the voiceless and can both inform and be used as an action toward reconciliation. Her arts practice is driven by both past and current First Nations affairs. Pauline presents work by way of verbatim dance theatre, sharing elders’ experiences of being stolen from their families, being kidnapped from their islands, being a part of the Native Police and enforcing massacres of Australia’s Indigenous peoples. Where she can, Pauline connects elders and community leaders with our youth.

“Having the wisp of our language embedded in a song and as we intertwine our elders’ voices with the reckoning of our bodies, we know that through our works, our youth will Walk Proud and Stand Strong”. Pauline Lampton 2020

Gould is the tribal spokesperson for the Confederated Villages of Lisjan/Ohlone. Born and raised in her ancestral homeland, the Ohlone territory of Huchiun, she is the mother of three and grandmother of four. Corrina has worked on preserving and protecting the ancient burial sites of her ancestors throughout the Bay Area for decades. She is a Co-Founder/Co-Director of the Sogorea Te’ Land Trust.

Estrada is from the Redwood Valley Little River Band of Pomo Indians from Redwood Valley California. She is very proud to be of service to the community teaching Northern Pomo Language, traditions, history and cultural competency. She serves on the Redwood Valley Rancheria Tribal Council as the Secretary. Estrada is a traditional Pomo Singer and dancer and most important a Mother of three children. She enjoys helping and serving the children and communities develop their confidence to change the cycle of stereotypes and traumas to resiliency.