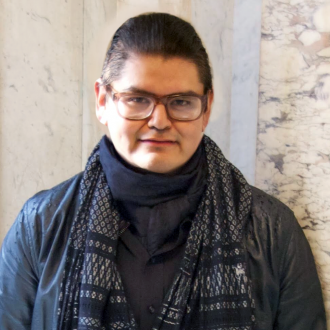 What does it mean to consider the Indigenous eye? How do we design an Indigenized space within the American theater? Costume and fashion designer Asa Benally explores the process, and the nuances of appropriation vs. appreciation.

Asa Benally is a Drama Desk nominated costume designer. He was raised in Big Mountain, AZ, on the unceded lands of the Navajo Nation. His grandmother, a traditional Navajo weaver, and his father, a silversmith, fostered his love and appreciation for art and design. His mother, of the Cherokee Nation, a professor and writer, expanded his love of academia and the arts. Asa went on to study at Parsons School of Design in New York City. He completed his M.F.A. in theater design at Yale University. His design aesthetic is derived from an interest in history and strong individuals. He is based in New York City and works all over the country.