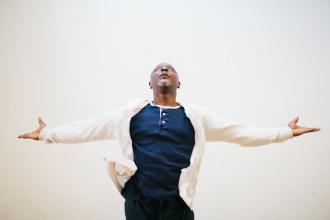 A Conversation with Robert Moses

In this lecture, Robert covers the history of Robert Moses’ Kin, discusses issues related to working as an African American, and screens and discusses his recent works including “Short Stories", a selection of solos and duets that focus on Black lives, social justice, and the transformative power of art in our lives compiled specifically with the disruptions of 2020/2021 in mind. He will focus on the process of gathering the impulses found in his work and preparing to present them in new contexts.

As an artistic innovative, committed instructor, and passionate community member, Moses’ efforts, experience, and aesthetic hew to a vision of support of the particular in expression, from Stanford University to community centers, Ballet Centers to conservatories, and Arts panels to selection-panels. Robert considers these shifts as an affirmation of his continued belief that the quest for knowledge and support of the arts should be a part of every life.

Robert Moses has created numerous works of varying styles and genres for his highly praised dance company. His work explores topics ranging from oral traditions in African American culture to the nuanced complexities of parentage and identity and the simple joys of the expressive power of pure movement. In addition to his work with Robert Moses’ Kin, Moses has choreographed for Alvin Ailey American Dance, The San Francisco Opera, Ailey 2, and other esteemed dance companies. He has choreographed for the SFFF, The Lorraine Hansberry Theater, New Conservatory Theater, Los Angeles Prime Moves Festival (L.A.C.E.), and Olympic Arts Festival.