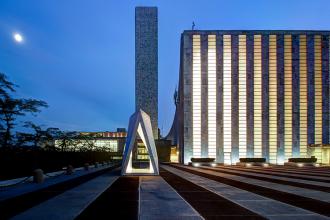 Understanding the history of slavery through architecture

The buildings, statues and monuments we sometimes blindly pass by each day represent a collective history and culture that can empower and bring us together.

That’s according to Rodney Leon, a New York-based, award-winning architect who, for nearly 30 years, has created cultural and religious architectural designs inspired by historical events.

Examples of his work include The Ark of Return, a memorial to the victims of slavery in the transatlantic slave trade at the United Nations Headquarters in New York City.

“We’ve created monuments that look forward to the future, in some ways,” said Leon, an American of Haitian descent. “They are places of healing, because these histories are our collective histories, and there’s an opportunity to acknowledge that we’re all connected in that fundamental way.”

Leon will take part in a discussion about black public art on Tuesday, Feb. 18, from 12 p.m. to 1:30 p.m. at the UC Berkeley Art Museum and Pacific Film Archive. The event is part of the campus initiative to commemorate 400 years of resistance to slavery and injustice, and is co-sponsored by the United Nations San Francisco and East Bay chapters.

Leon sat down with Berkeley News to talk about the importance of paying homage to ancestors through media, like architectural design. He also gave his perspective on what should be done with monuments and structures that represent racist and prejudiced historical figures.

Berkeley News: Why was it important for you to incorporate the transatlantic slave trade into your projects at the U.N. and the Manhattan burial ground?

Rodney Leon: People think of the issue of slavery in the United States as primarily a southern institution. They don’t necessarily think about it as something much larger and more integral to the development of communities during our colonial history.

Outside of Charleston, South Carolina, New York had, at one point, the largest slave-owning population in the United States. The people buried in the burial ground in lower Manhattan at the time had worked as carpenters, as firefighters, they worked on boats, they worked as skilled and unskilled labor to help build up New York City. So, that monument shows the scale and impact of slavery — beyond what we traditionally understand to be slavery historically, in our memory, and how it has been presented in the media.

These projects really begin to talk about our human responsibility to not repeat the exploitation that slavery represents, and also to acknowledge that, right now around the world, it’s still happening today.

What is the archival research process, or mindset, that goes into conceptualizing these types of projects?

We do a lot of research to establish a reservoir of information to work from that is often historical and helps to inform and make the space, or the place, or the objects, more specific and connected to the story we’re trying to tell.

But at the same time, we’re also trying to tell a broader story.

We’ve done research on places like Gorée Island, off the coast of Africa, at the Door of No Return (at the House of Slaves museum). It’s a place that people go when they visit West Africa to engage in that memory and that history. We’ve introduced the larger idea of “return,” instead of “no return,” in our design, so with the African burial ground we have the Door of Return, and on the plaza at the U.N., we have The Ark of Return.

The idea is that, many centuries later, people of African descent are able to return. There’s an idea of healing and transformation, an idea about how to undo some of the negative aspects of that history and engage it in a therapeutic and positive way.

How do your architectural designs get people engaged in the history behind your projects differently than other art media?

We straddle the space between sculpture and architecture in these memorials. Traditional memorials may be a wall or a statue, a more static object that you stand back from. We tend to approach the memorials as spatial and interactive places that you occupy, that you move through and interact with in an engaging way.

For the burial ground, we researched signs and symbols that had spiritual significance from different people of African descent from different parts of the world. We’re talking about the spiritual belief system that came from the African continent, or dispersed, but also manifested in different ways throughout the world. Then, we brought these symbols together in this circular space.

So, in the burial ground, they’re organized from top to bottom. It starts with symbols that relate to the capacity of human beings to endure difficulty and suffering. We transition into symbols that are male and female, guardian symbols that talk about the transition from life to death and symbols that then talk about God and religion and are better reflective of spiritual guardians.

In terms of these older classical monuments and structures of historical figures who were proved to be prejudiced or racist, should they be taken down?

It’s important to look at these historic monuments and place them into context. At the same time, it’s important that they’re there, because it also tells a story. That story might be exclusive, as opposed to inclusive. So, I tend to defer to the people in those communities who know what the impact those memorials have on their well-being and psychology.

But we can also make a public comment upon, and also acknowledge, some of the stories that have been missed and ignored in the past by creating alternate spaces and complimentary spaces, to address what those memorials were actually representing in a more inclusive way.

I tend to lean toward creating more, than toward taking things down. But in certain instances, the context for putting those things up in the past also helps tell whether they should be taken down.

A lot of those statues were not just put up during the Civil War, but as a response to the civil rights movement of the 1950s and 1960s. They weren’t really confederate monuments, they were monuments in defiance of equality.

In that context, it does make sense to take things down. In other instances, it makes sense to bring things to light and create new things to show where we are now as a country, and as a people, so we can see how far we’ve come.