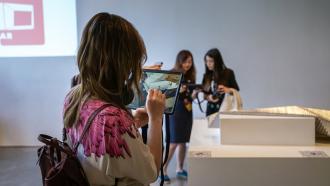 BAMPFA AR—Augmented Time, an augmented reality project exploring new modes of storytelling, was selected as one of the finalists in the special projects category for The Plan Award 2020, hosted by the acclaimed architecture and design publication, The Plan. The project was led by Luisa Caldas, professor of architecture at UC Berkeley’s College of Environmental Design and director of the Virtual, Augmented and Mixed Reality Laboratory (XR Lab), with assistance from a multidisciplinary team of computer science and architecture students. The project was funded by the Arts + Design Initiative and a FHL HTC Vive Center Seed Grant.

BAMPFA AR was developed to showcase the workers behind the Berkeley Art Museum and Pacific Film Archive (BAMPFA). The project consists of three experiences: the building’s inauguration as the UC Berkeley printing press in 1940, its shift to an abandoned structure covered with graffiti by local artists, to the contemporary cultural hub designed by New York-based architects Diller Scofidio + Renfro that stands today. The augmented reality experience enables Caldas to unveil unseen narratives such as the building’s role during World War II, the architecture concepts behind the Diller Scofidio + Renfro design, and the workers who constructed the building.

Utilizing iPads and headphones available at BAMPFA’s front desk, users are guided through the augmented reality experience by audio narration. The experience is accomplished by overlaying multimodal digital media over physical artifacts, including a large-scale model acting as an augmented reality canvas, and activating the interior building fabric to unveil the passage of time through space.

A complete list of the project team and credits can be found here.

The Plan community members have until September 30, 2020 to vote for BAMPFA AR—Augmented Time on The Plan Award website.