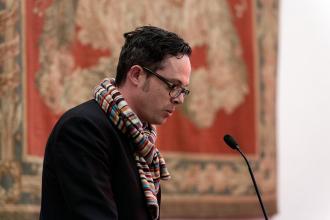 By
Kirsten Mickelwait, Promise of Berkeley

With 25 faculty from 23 departments, the Berkeley Center for New Media (BCNM) is an interdisciplinary research, teaching, and public events program that studies new media from the perspectives of the humanities, arts, and technology. We spoke with Nicholas de Monchaux, BCNM director and associate professor of architecture and urban design.

Why does Berkeley have a center focused on new media?

Media is changing radically, and our society is changing with it. The conversation about new media is critically important to help us think about the world, political structures, technology, child development, news coverage, and more. Now the main commodity is not access to media. It’s our attention — we only have so much time to give.

How has your work impacted the general public?

In 2017, there was a big conflict about free speech when conservative commentator Milo Making sense of new media Yiannopoulos was scheduled to speak. A week later, BCNM hosted a campuswide symposium that addressed the history, practice, and spaces of free speech within the university. A week before the 2018 midterm elections, we held another symposium to explore the effect of social media on political campaigns and the role of software algorithms in gerrymandering to artists and activists in unconventional media. We’re responding to such issues in real time.

What are your thoughts about the future of journalism?

The “golden age of journalism” was the product of a previous ecology. Information is now free, so we must develop new, economically sustainable models of journalism. But far more threatening, I think, is the way in which the contemporary media landscape has fractured into separate tribal stories around what is happening in the world. Talking across differences is the most…essential way to produce innovative thinking, and the future’s going to need it.