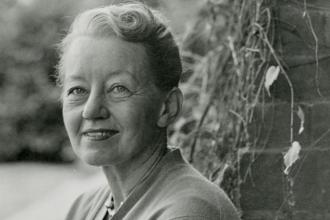 The concrete Brutalist architecture-style building on UC Berkeley’s east end is known to the campus community as Wurster Hall, named after husband and wife William Wurster and Catherine Bauer Wurster, Berkeley professors who together in the 1950s helped to create Berkeley’s College of Environmental Design (CED), the first college of its kind in the world.

To the greater public, though, Catherine Bauer Wurster is not equally recognized as part of the Wurster Hall namesake.

“I think a lot of people just assume the building is only named after her husband and have no idea about her legacy and significant accomplishments,” said Berkeley Environmental Design Archives Curator Chris Marino. “She was just as much behind the creation of CED as was her husband.”

That is why the building is being renamed Bauer Wurster Hall.

Regarded by some as the mother of public housing in America, Bauer Wurster worked as an educator at Berkeley and Harvard University for 24 years and was the first female faculty member to join the Department of City and Regional Planning at Berkeley.

Prior to her sudden death in 1964, she pushed to combine the departments of architecture, city and regional planning, and landscape architecture to create the CED program where Bauer Wurster served as its associate dean, after her husband retired as the college’s dean.

Chakrabarti and Chancellor Carol Christ will host a livestreamed video panel “toast” to the renaming today (Dec. 9) at 4 p.m. Bauer Wurster’s impact on Berkeley and American housing reform will also be discussed at the virtual event by Marino and members of the campus’s 150W committee.

“Catherine Bauer Wurster and William W. Wurster were decades ahead of their time as the founders of a groundbreaking interdisciplinary college dedicated to fighting climate change and social injustice through the dual lens of design and research excellence,” said Chakrabarti, who started as dean of CED in July 2020.

“It is our great pleasure to reaffirm the name of our heroic building as Bauer Wurster Hall to honor this visionary couple, both to reflect the need for equity in our history and to signal a renewed commitment to the issues of public housing, sustainability, racial justice and social infrastructure that are so critical to our collective past, present and future.”