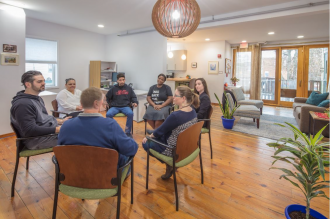 Last June, in the aftermath of the police killings of George Floyd and Breonna Taylor, Berkeley joined a handful of cities across the country that began defunding its police, slashing $9.2 million or 12 percent from the police budget. Whether cities like Berkeley will continue on a path towards completely defunding and abolishing the police remains to be seen. What is certain about a future without police and prisons, according to abolitionist and architect Deanna Van Buren, is that you can’t simply tear down the existing structures—you have to build new ones in their place.

Van Buren is the design director and co-founder of Designing Justice + Designing Space (DJDS), a national, Oakland-based architecture and design nonprofit that creates these very spaces—imagining, as she does in her TED Talk, “what a world without prisons could look like.” In 2019, DJDS opened one such center, Restore Oakland in East Oakland, where community members can access job training, conflict resolution, and business incubation. Compared with the often dark, windowless rooms of typical justice buildings, Restore Oakland’s walls are painted in soothing colors and feature large windows. As Van Buren told Curbed, “The nervous system [response to conflict] is fight, flight, or freeze and the design is mitigating that.”

In 2019, Van Buren received the Berkeley-Rupp Professorship Prize and served as a visiting professor in the UC Berkeley College of Environmental Design. California spoke with Van Buren about the role of architecture in prison abolition movements, what alternative spaces look like, and the ongoing challenges to abolition.

How does this larger movement to defund and abolish police and prisons intersect with your work as a designer and architect?

"In the way that we've used architecture and design to amplify criminal justice, I believe we can use our same skills to amplify another kind of justice," says director and cofounder Deanna Van Buren. // Photo courtesy of Designing Justice + Designing Spaces

I’m absolutely an abolitionist. My organization (DJDS) is based in that value or goal. The defund-the-police [organizers] are working at the state level to fight for the dollars they see going to the police to be reinvested into alternative pieces of infrastructure, like the calling of 311 over 911 or the creation of peacemaking or de-escalation centers. Our work is to support the financing and architectural development of those kinds of places. If that’s what we’re doing—if we’re calling 311 instead of 911 or if we’re trying to focus [on] survivors over police intervention—then there’s a different type of infrastructure required for that. It’s not just the de-escalation center. It’s also drop-off centers, pre-arrest diversion centers, sobering centers, behavioral health, and crisis intervention centers. There’s a whole layer of infrastructure to build to support that defunding. You’ve got to have a plan and roadmap of what you’re going to be moving that money into. And it’s a fight. The criminal justice beast does not want to get rid of their money. They might want to move it around inside of the system, but they don’t want to move it out.

What is a de-escalation center exactly?

The de-escalation center may be a place where those first responders who are not the police are based. They’re able to come out and respond or you could physically go there to see them. One of our coalition colleagues down in L.A. is doing a peacebuilders program where people are coming to this justice center and learning how to de-escalate violence. It’s also a place where they do restorative justice and transformational justice on-site. There are a lot of things happening there that are all related to not using the police, de-escalating violence, and supporting people when they’re in that kind of crisis.

Can you talk a little bit about how architecture, design, and the built environment plays into restorative justice?

Most of us are not used to doing restorative justice—like what is that? Restorative justice is a philosophy and a set of practices that are about repair. [Restorative justice programs] divert people out of court and into conversations with a plan to address the offender’s conduct and hopefully meet the needs of the survivor. That kind of infrastructure requires programming that goes with it. And we believe in order for those programs to be most successful, the environment, its location in the community, what it looks like, and how it feels are all really critical to supporting a shift in cultural practice. In the way that we’ve used architecture and design to amplify criminal justice, I believe we can use our same skills to amplify another kind of justice.

"It's like a space that looks like you're living there: There's a kitchen. You can get some coffee, have some food," says Van Buren of the New Westside Peacemaking Center in Syracuse, NY. // Photo courtesy of Designing Justice + Designing Spaces

If we really want restorative justice to be the primary way of addressing harm in our communities—which is what I think we have to do if we want to defund the police—we have to build for that. This is where we build more housing, more behavioral health centers. We’re actually working on a tool called the alternatives to incarceration tool, which identifies 30 to 50 building types that have to get built. And restorative justice centers are just one of them.

What are some of those other alternatives to incarceration spaces you all have identified?

We basically have like eight or nine categories of infrastructure. Everything from special types of education spaces to spaces for survivors of violence to a whole constellation of behavioral health environments. Something we’ve been working on in Atlanta is our centers for equity, which are sort of one-stop-shops. They have everything from behavioral health to really quality-high food and community spaces. Youth spaces are important too because young people are a great way to starve the beast. Take care of our young people and they won’t be flowing into our prisons, jails, and detention centers. That’s a huge missing piece of our [current] infrastructure.

How do you all decide what these spaces look like?

The concept development process emerged out of my early work. I didn’t know what this stuff looked like because they were new. I didn’t know what a de-escalation center looked like. We learned this by talking to people. We do deep community engagement. Our community engagement process is more of a co-learning process where we’re learning things from the community, but we’re also sharing our knowledge around design, real estate, and finance. From the get-go, we are really deeply engaging them around, what does this stuff look like? What does justice look like if it’s intended to repair?

Now that you have successfully designed and built some of these spaces, can you walk me through how they actually look and feel?

Anytime you have an environment that’s going to elicit trauma, you have got to have spaces where people can get away and get out quickly, where they can process what’s happening for them. Those kinds of environments are rare.

There are not that many of them. They’re small-scale to date. In an ideal world, there’s some landscaping feature that is attached to it, so you’re entering through a garden or courtyard, you’re not entering straight off the street. When folks are coming here, they’re super anxious, nervous, terrified, ashamed—all of those things. You really need them to be coming into an environment that helps them modulate their nervous system and their fight-flight-freeze response. Have artwork integrated into the space and things to touch and feel and look at, so it’s not a sterile environment, it’s a pace that harkens them back to some place they think is safe and comfortable.

[At the de-escalation center in] Syracuse, you enter into a living room. It’s like a space that looks like you’re living there: There’s a kitchen. You can get some coffee, have some food. You can see where the [restorative justice] circle is going to happen. There’s something about visibility. A courthouse is the opposite, right? You can’t see anything. That’s the whole point, to separate everybody. Here, you should be able to feel veiled or private, but also visible. You need cool-off rooms. Anytime you have an environment that’s going to elicit trauma, you have got to have spaces where people can get away and get out quickly, where they can process what’s happening for them. Those kinds of environments are rare.

How do you think we get to a place as a society where more people are opting for this type of justice?

There’s a lot of levels that we have to push in order to get ourselves there. First, you have to make it available. If you want to look inside the criminal justice system, convincing district attorneys and prosecutors to get on board. A district attorney can really have a lot of power in deciding if they’re going to implement a diversion program, what kind of cases get diverted, and our ability to do more and more extreme cases.