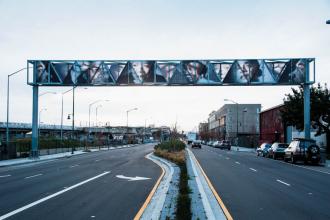 “Black landscapes matter because they are prophetic. They tell the truth of the struggles and victories of African Americans in North America,” writes UC Berkeley professor Anna Livia Brand in an essay in Black Landscapes Matter (University of Virginia Press). The forthcoming collection, coedited by landscape designer Walter Hood, examines a past, present, and future of the Black American experience as spatially archived in cities such as New Orleans, Detroit, Oakland, California, and Charleston, South Carolina.

After witnessing the role of the public realm in the killings of Trayvon Martin and Michael Brown, Hood and coeditor Grace Mitchell Tada initiated a dialogue with other practitioners to interrogate two central questions: Do Black landscapes matter? And how do we plan within a context of disinvestment and disenfranchisement? This discussion evolved into the material presented in the book.

Various essays explore themes that Hood and Tada culled from 400 years of American history, weaving together personal reflections, notes from the field, case studies, photos, and provocations. One example is the theme of commemoration, evident in Hood’s recent design work for the International African American Museum in Charleston, being designed by Moody Nolan and Pei Cobb Freed & Partners, which creates a memorial on the site of one of the largest hubs for the importation of kidnapped Africans. Another is that of self-determination, viewed through the lens of the development process behind the Beerline Trail in Milwaukee.

Black Landscapes Matter could not come at a more critical time, with this summer’s protests—as well as the trauma of the COVID-19 pandemic—provoking an acute reckoning with systemic racism in both the public sphere and the landscape profession.

And while many of the Black spaces the essayists discuss face persistent threats of erasure from historical redlining, urban renewal, and current gentrification, the book argues there is ultimately a case for hope—but only if Black landscapes are properly recognized and valued.

How and when did this project come together?

The last decade has been a tremendously tumultuous time for people of color in this country. With both Trayvon Martin and Mike Brown, I really noticed how the landscape in which these young Black men were occupying became more and more of the story. As a professor, I’ve been thinking about ways to have a conversation with other colleagues around these issues. I originally organized a colloquium, inviting a half dozen people to speak to this subject in a broad sense, and creating a forum to ask ourselves, Does the landscape really matter, and it if it does, how can we change the conversation around it?

What does it mean to design with a consciousness and eye for cultural geography and to integrate this thinking in your design process?

In the 1980s in academia, historians and cultural geographers led a push to reexamine the ways that we think about place—expanding beyond the social elements to consider things like feminism, racism, and the allied arts. But this cultural turn, and the critique and reflection it forces, didn’t really happen in landscape architecture.

Once you look at the environment through a race lens, you can’t use the typical social metrics that the field so often relies on. I’ve been impressed for years by the mantra from bell hooks that designers should have a prophetic aesthetic. What it means is that there’s a truth in the aesthetic of a place, so telling the truth becomes a way in which we can be more critical of these places. Every place has these histories and if you put the truth out there, it will tell you what needs to be done design-wise.

For example, we worked on a project in a post-industrial area of Pittsburgh that was heavily disinvested from over 20 years. And through that context of vacancy and neglect, the successional landscape emerged—trees and weeds grew were they weren’t supposed to, creating this lush overgrown landscape. We tried to articulate to people in this neighborhood that what happened to the landscape is actually good, that you can now create a landscape that looks like that rich one out in the suburbs—where you have woodlands, animals, vegetation. I want people to be in a healthy environment and have this backdrop to reinforce these wider ideas about the environment.

The book highlights that Black landscapes are a critical a way of processing and commemorating the past, present, and future of the Black experience in America. Can you talk about the role that memory, commemoration, and time play in Black landscapes in particular?

First and foremost, everybody’s past should be valued in the design process. With our early projects we would try to reveal the multiplicity of culture in a place. When I first started making projects, all I was trying to do was bring things from the past into the present, through form and interpretive moves. It was not about race necessarily but about, for example, the story of a creek through the neighborhood or how the name of the place reflects who uses it.

More contemporarily, I’ve had an opportunity to be more prophetic in a very clear way. Until recently, people haven’t been ready for this way of working. For example, with the International African American Museum in Charleston, it allowed us to be a little more emboldened to talk about issues that aren’t typically talked about in that city, specifically around slavery. And not just referencing it on a plaque, but to talk about it as an experience and expression.

IAAM is on a real site of historical significance: Gadsden’s Wharf was one of the largest slave arrival ports in the South. And we felt compelled to directly reference what happened there. These places need to be exhumed and these stories need to be told truthfully and to break away from traditional ways of how we represent history. We ended up for the design with a fountain of figures, and articulated how slaves passed in ships and relating it to the harbor with a view of the Atlantic.

Black Landscapes Matter argues that it’s time for a radical rethink of the profession. It seems like diversity, equity, and inclusion have moved up the agenda in the past couple of years. What do you make of where the profession is on these issues? What more would you like to see done?

The profession has to do what the rest of the country has to do. It has to be critical of the institution of whiteness that is actually continually shaping the spaces and environments that we live in. The first step is to do the work; read the books, have the conversations. It’s not enough to just say Black Lives Matter.

The way I’m working today is no different from how I was working 20 years ago. In 1997 I was talking about street theater and liquor stores and all these forms present across Black landscapes. And the profession could’ve responded then, but that work was seen as fringe at the time.

It requires telling the truth about this landscape and doing a lot of unpacking, and for a lot of people that’s scary. But people have to do the work, and we can’t do it for them.