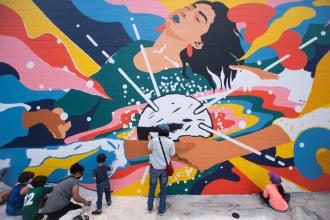 Astrophysicist Chung-Pei Ma at the University of California, Berkeley, has studied black holes for decades and has dreamed of cruising by one in a spaceship to check out how black they really are.

Though she has never gotten that close to a black hole, she turned out in San Carlos, California, last week to paint a picture of one as part of a mural supervised by multimedia artist Amanda Phingbodhikpakkiya, who is painting walls around the country to honor women scientists of color.

Phingbodhipakkiya’s colorful mural, which she calls “Horizon Light,” was inspired by Ma’s research, which focuses on supermassive black holes that Ma has shown sit — often hidden from view — in the cores of most galaxies. Only the orbital motions of light-emitting objects such as clouds of hot gas betray the black holes’ existence.

As Phingbodhipakkiya describes the 88-foot-long mural, it “finds parallels between the sparse luminous matter astrophysicists use to detect black holes with the work that women do in revealing hidden truths about the world.”

Ma first heard about the Findings Project when Phingbodhipakkiya (PING-bodee-bak-ee-ah) called her out of the blue in early May to ask about her research. Through Zoom, Ma showed her simulations of star and gas motions around supermassive black holes, which allow Ma to weigh them. She eventually worked with the artist to depict these strange objects without making them scary.

“I did not want the black hole to be portrayed as intimidating, I didn’t want this to be like Darth Vader’s Death Star,” she said. “I think more support for similar kinds of outreach activities for science, especially for the physical sciences, which tend to be intimidating to people, will be really helpful.”

In the mural, three women of color — one in a hijab — hold hands in kind of a whirling dance around the black hole, as if they too are in orbit around the center of the galaxy.

“I think this mural idea is great, and the painting part was so much fun. Though I did not realize how big it was,” Ma said. “It is great to have the opportunity for scientists to work with an artist who is so enthusiastic, so eager to represent us.”

Size is a major reason Phingbodhipakkiya chose murals as her medium when she was approached by the Heising-Simons Foundation to collaborate on art that would highlight women in STEM, and in particular, women of color in STEM.

“The power of murals is that they are impossible to ignore. They are too big and too bright and too dynamic,” Phingbodhipakkiya told Science magazine in a recent interview. “I wanted to put science squarely in society in a way that invites people into this incredible research. I love public art. It doesn’t sit behind gallery walls. It’s out there in the wild for anyone to enjoy. That’s really the approach we need to take with science and science literacy and science education and communication. Because so much of the time we’re in an echo chamber.”