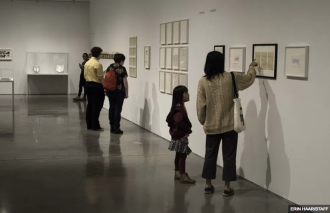 By
Jennifer Jeong, The Daily Californian

When viewers enter the brightly lit space of the Berkeley Art Museum & Pacific Film Archive, they would be surprised to learn that all of the works in “Avant Dictee” were done by one artist — not only because of the abundance of art, but also because of the diversity of mediums. Although these artworks are variously illustrated, built and filmed, they all narrate a single story: that of the published book “Dictee.”

The writer of “Dictee,” Theresa Hak Kyung Cha (1951-1982), is also the artist who created the exhibit around the book’s 10 thematic sections. Her works are characterized by repetition, as she explores these themes again and again in various mediums — including photography, film, poetry, sculpture, mail art and more — drawing the words from the pages of the book and placing them an entirely new three-dimensional space to occupy.

Cha’s works are largely based on her background and experiences — a sort of autobiography narrated through multiple creative constructions. Born in Busan, South Korea, Cha immigrated to San Francisco at the age of 13. There, she attended a Catholic high school until she proceeded to UC Berkeley, where she earned four degrees and generated most of the work on display at BAMPFA.

Perhaps because of her cross-cultural background and early departure from home, Cha’s body of work is characterized by the recurring themes of language and memory. Both written and spoken words are continuously incorporated in English, Korean and French, mirroring her own identity as an immigrant and a literary intellectual.

“The main body of my work is with Language, ‘looking for the roots of the language before it is born on the tip of the tongue,’” explains a quote from Cha, displayed on the wall of the gallery.

Cha brings these words into being by interweaving fragments of memory and time into her portfolio. The words are pithy associations that paint larger stories and memories, especially related to moments in Cha’s life. The repetition of words extends the fleeting lifetime of these moments, even decades after Cha’s death.

The exhibit opens with an untitled photo essay that is essentially a documentation of significant moments in Cha’s life, accompanied by lyrical descriptions. Some of these photos resonate with certain sections of “Dictee,” and so do all of the following works on display, although in different styles and magnitudes.

Especially eye-catching is the video installation titled “Passages Paysages,” a three-channel film art in monochrome. A series of three screens presents the viewers with ephemeral still images until they dissolve and all is left is the mournful narration that speaks in different languages.

Cha describes the piece as “absent of the object,” as the viewers are faced with only a flickering vestige of what once was. Unlike other installations with sound that feature headphones, the muffled murmur of “Passages” is left on projection to fill the space of the gallery. The audience is drawn to the work by the noise and is left to try to make sense of the spoken words as well as the vague images on the screens.

Much like the forlorn droning of “Passages,” the exhibit as a whole has a dispiriting tone, with simple white walls adorned with equally colorless pieces. Cha’s rigorous investment in repetition and language render all of her works to be similar — almost boring — despite the variety of mediums used.

In addition, as BAMPFA is currently under construction, focusing spiritually on the profound messages of Cha’s work is nearly impossible. The site of art is arguably as important as its content, especially considering the meditative value of “Avant Dictee.” Unfortunately, the noise from the construction made it difficult to experience Cha’s art.

Like “Passages,” all of the works in “Avant Dictee” push the audience to interpret the abstruse language of the artist. It is the audience that receives the dialogue formed by the artist’s oeuvre, and Cha describes the viewers as holding a “privileged place,” as they are the activators who endow the language with their own meanings.

But “Avant Dictee” is based solely on the artist’s own experiences, narrated in her own written book “Dictee.” Because the majority of the viewers do not have access to these before their visit to the exhibit, it is difficult for them to interpret the language spoken by Cha. In fact, some of the pieces were disturbing and others outright odd.

Art is always up for interpretation, but the nature of Cha’s exhibit is extremely philosophical — creating a certain disconnect between the audience and the artworks. By entering the gallery, the viewers are forced to confront an entirely new foreign language. The space appeared to be verbose, somehow, without telling any real stories.