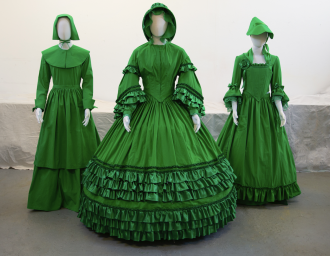 Why is UC Berkeley Assistant Professor Stephanie Syjuco sewing American historical garments — all of them bright green — at her Richmond Field Station art studio while researching Hollywood Civil War movies? She’s preparing an eye-catching, thought-provoking exhibit that opens in November in Washington, D.C., at the Renwick Gallery, a branch of the Smithsonian American Art Museum that’s home to the museum’s collection of contemporary craft and decorative art.

Berkeley News recently visited with Syjuco, who is internationally known for her large-scale sculptures and installations that combine handcrafting methods with digital technologies and social engagement. She teaches classes in the Department of Art Practice in sculpture, social practice, photography and experimental media.

You’re outfitting three mannequins in your studio in period costumes — one in Pilgrim attire, another in American Colonial Revolutionary dress and the third in a Civil War-era ball gown. What’s your project about?

I’m an immigrant and naturalized American citizen from the Philippines — I came to the U.S. at age three, with my mother, and made the Bay Area my home. And over four decades I’ve absorbed and inherited a narrative of American history that I’ve come to see as my own. But the story of this country is primarily told through a lens that doesn’t accurately reflect all perspectives. If, as the famous saying goes, history is written by the victors, how is the very story of America edited and constructed, and by whom?

What I want to show in this Smithsonian exhibition on contemporary craft in America is that there are hidden histories and power structures in these crafted garments, and that the story of America was also fabricated. At first, the clothing is seductive to the viewer — everyone loves looking at the handmade detail, at a very beautiful thing — but there is a flip side to that beauty.

These garments embodied the social and political ideals of their time and were not necessarily emancipatory. They represented the crafted construction of white womanhood, nationhood and the ongoing invention of American identity — and they occurred under the visible and invisible banners of white supremacy. I chose to fabricate women’s garments because, although there are certainly sewing patterns available for men’s costumes, the female form is constantly romanticized and projected upon.

Why are the garments green?

All the fabric is chroma key green, a vibrant color used as a backdrop for cinematography and video production. It’s part of a special effects process known as chroma key that allows TV producers and movie makers to digitally superimpose their subjects onto different backgrounds. The green is singled out and “deleted” using computer software. So, this background color is actually supposed to be “invisible” or ignored. The irony is that, in this work, it is actually very vibrant, and you can’t avoid seeing it.

These constructed garments embody the ideals of the time, of American history, but also hide inescapable trauma as a result of unequal distributions of power and the repression of different communities. I want to bring this background to the foreground; I’m attempting to make these historical problems difficult to ignore.

Tell us about the three outfits and why you chose those time periods.

These garments are sewn from mass-produced patterns for costumes used for historical reenactors, people who want to emulate or relive those times. The Pilgrim outfit is the stereotype that represents the founding of America and all the hopes and dreams of the settling of this nation. But the stories of bounty and plenty shared with Native peoples is a convenient narrative, and the resulting destruction of Native populations is ignored or downplayed.

The American Revolution of 1776 is celebrated as the birth of American democracy, but it only focused on the freedoms of white men, literally. Slavery was legal, and women were not given the vote till a century and a half later.

The Civil War ball gown is the most opulent of the three, the most elaborate and painstakingly detailed garment. It’s an imitation of a gown from the Antebellum South, and the assumption is that garments like this were worked on primarily by enslaved black seamstresses. So, all this beauty and detail has an invisible story of trauma and contradiction.

How did you research these eras in American history?

While I work, I’ve been listening to podcasts on American race and culture (Code Switch, Seeing White, Uncivil), absorbing historical accounts and cultural analysis. It’s great background research and helps me think further about the ideas I’m working on. For a different view, I’ve also been watching Hollywood movies set during the Civil War — from Gone With the Wind to The Beguiled — and it’s interesting how they reflect not so much what happened, but what society wants to rewrite or romanticize.

And how did you learn dressmaking and hatmaking?

I am a self-taught sewer and learn skills when necessary, depending on the projects I work on. I was one of those crafty kids who went into art because I liked to make things. I don’t specialize in sewing in my practice, but I see it as a part of a larger toolbox of skills, which includes working in video, photography, woodworking and digital fabrication. I’ve given myself several months to work on these chroma key green garments, and they’re just one component of a larger artwork that will be exhibited in November. I’ve used sewing as a technique in previous projects, but not with this much detail.

What were the biggest challenges in sewing these garments?

The boning structure in the bodices of the Antebellum South/Civil War dress and the American Revolution dress was a challenge. “Boning” involves the insertion of thin strips of metal into a garment to hold it upright and constrain the body into a specific shape, similar to what a corset does. And there are some intense pleats on the Victorian ball gown that contain yards and yards of fabric, about 20 feet in all. The skirt is huge, with a large, five-tiered hoop skirt underneath it to add fullness. All in all, producing these garments involved techniques that are not commonly used in contemporary clothing and evidence a very specific amount of labor and attention to detail.

The handiwork, mostly trim and details, on the garments was all done by hand. It includes 120 feet each of pleated and hand-sewn ribbon and ruffles. I made the ribbon cockade on the American Revolution-era dress by hand; cockades were worn as pins during wartime to show patriotism and what side you were on. During the Civil War, different states had different cockades, worn by both men and women. It was hard to match the color for all this fabric, ribbon and trim. I searched a lot of supply stores and fabric shops to get the colors to match as closely as possible. Even the buttons are color-matched with a specific paint to get it right.

Making something by hand can be a slow, laborious process, and it gives me time to reflect on the ideas in my work. While I also have other projects that are digitally based and use video and image-editing techniques, I have a strong “analog” component in my projects, where I spend a lot of time learning how to build things by hand. I think knowing how to make things helps connect you to thousands of years of human history and culture — all the people who came before you and passed down their skills in craft and art.

What do you hope people will take away from this exhibit?

These garments will be exhibited at Renwick Gallery’s Disrupting Craft: Renwick Invitational 2018 with a larger body of work called “Neutral Calibration Studies (Ornament + Crime)” that examines the legacy of colonialism and empire. I’m also including other textile-based works that are intensely patterned — as a contrast to the chroma key green garments — along with photography and installation work. It will be a lot of stuff and really visually graphic and eye-catching all together. The work deals with a lot of intense issues, and it’s a direct result of responding to the current political climate, a time where democratic ideals are being tested, and xenophobic views are on the rise.

Everything in our lives is fabricated — our stories of what we represent, what we mean, what we do, what we think is important. In re-making these garments and the other works in my show, I’m trying to consider how American history is also a construction, and questioning if our reality matches our ideals. Ultimately, I believe we all have the power to construct a different reality and future, but we need to examine the complicated and contradictory stories of how we got here.