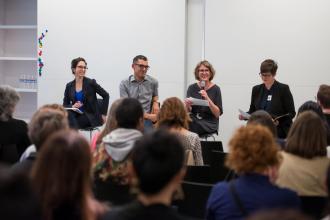 The Arts and Public Service at SFMOMA

On May 11, the San Francisco Museum of Modern Art (SFMOMA) hosted more than 100 individuals in their Koret Education Center for a two-hour-long public discussion about The Arts and Public Service. The event was the first of many planned for this year to promote public dialogue on the cultural impact of urban changes as part of Public Knowledge, a two-year initiative launched by SFMOMA in April of this year. Organized in collaboration with UC Berkeley’s Arts + Design Initiative and Yerba Buena Center for the Arts, the talk welcomed two panels with commentary and discussion from Shannon Jackson, Associate Vice Chancellor of the Arts + Design and the Director of the Arts Research Center at UC Berkeley; Dominic Willsdon, Curator of Education and Public Practice at SFMOMA; Lucía Sanromán, Director of Visual Arts at the Yerba Buena Center for the Arts; Michelle Jeffers, Chief of Community Programs and Partnerships at San Francisco Public Library; Ebony McKinney, Program Officer at San Francisco Arts Commission; and Christian Frock, Founder of Invisible Venue, Independent Curator, Writer and Educator.

Organized in partnership with the San Francisco Public Library (SFPL), SFMOMA intends to host programming under the Public Knowledge initiative at different locations across the city to promote accessibility and participation. The discussion began with Deena Chalabi, Associate Curator of Public Dialogue at SFMOMA, introducing the concept of the initiative and the planned July 2018 Public Knowledge intensive that will include an exhibition and symposium. Chalabi also made a public call asking about any initiatives, programs or projects that they should be aware of.

Dominic Willsdon began the conversation with an overview of the recently published book Public Servants: Art and the Crisis of the Common Good, co-edited by Willsdon, Shannon Jackson, and Johanna Burton. The book initiates a timely exploration around what it means to publicly engage with art in the 21st century, discusses the artists role and explores the ways in which art can engage with shifting institutional structures. At the talk, Willsdon asked “How can we collaborate and think differently about institutions? What are the roles of institutions in education?” Shannon Jackson responded by proposing that we think differently about institutions by modifying systems that might serve us better in the 21st century. By reading the definitions of the word “assembly,” Jackson explored ways to address these modifications. Her suggestions included institutions coming together to reimagine public service and providing clear pathways for the public and especially artist's to re-engage and not only participate, but play an official role. Similarly, Lucía Sanromán argued that institutions, like her own at YBCA, need to step outside of their comfort zone and take on roles in the community in order to be more accessible. Sanromán explained that she would like to see where they can bridge the distance between the public and the institutions in order to truly perform a public service. To initiate this, YBCA is also planning a two-year public engagement, The City Initiative, that features exhibitions, programs and community discussions around topics such as citizenship, immigrant rights, and collaborations with the city. Their current exhibition, Visualizing Citizenship: Seeking a New Public Imagination, is part of The City Initiative series and is on view through June 18.

The talk continued as Michelle Jeffers, Ebony McKinney, and Christian Frock discussed public access and education. Michelle Jeffers described the San Francisco Public Library (SFPL) as an institution that is always about "public first." The SFPL provides an extensive variety of services and programs, covering everything from health care to earning a high school diploma, to organizing classes around 3-D prosthetics design and sewing. Ebony McKinney added that the San Francisco Arts Commission is investing in cultural equity that encourages illuminating cultural traditions and cross-cultural collaborations by providing 45 $15,000 grants to artists for the creation of new work in 2017 in visual arts, literature and media. As an educator, writer and curator in the Bay Area, Christian Frock is focusing on teaching students about accountability, responsibility and privilege by using current events in art and politics to engage in timely conversations.

The panel concluded with questions and statements from the audience. One person asked "what will it take to have all of the institutions working together? And what does that look like?" Through artist projects, research collaborations, public programs, and publishing, SFMOMA's new Public Knowledge initiative will seek to build new connections between ideas, individuals, and communities to approach this question.

Images from the talk courtesy of SFMOMA: