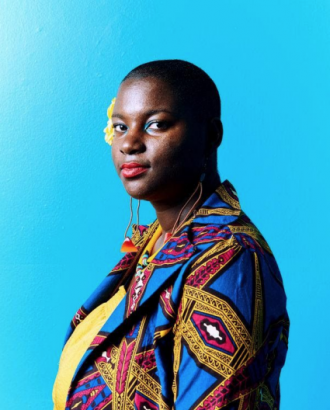 The UC Berkeley Department of Art Practice is excited to announce that internationally recognized artist ​Kenyatta A.C. Hinkle​ will join its faculty as Assistant Professor of Painting in Fall 2018.​ Hinkle is an interdisciplinary artist whose practice includes drawing and painting, immersive installations, sound art, performance, activism, and writing.

Recently on view at The San Francisco Arts Commission and the California African American Museum, Hinkle’s ongoing series of work The Evanesced (2016-) is an expansive series of loosely rendered figurative drawings and paintings – semi-abstract “unportraits” that call attention to the erasure of the thousands of black women who disappear every year due to colonialism, human trafficking, homicides, and other forms of erasure. The series also has a suite of performances. Hinkle asks, “How can we retrieve people? How can we retrieve ourselves and make ourselves instruments of change? … I’m not interested in defining what my art is. I’m interested in what it has the power to do.”

The Kentifirica Project (2012-) is an ongoing interactive installation in which Hinkle researches and creates collaborative artwork about her identity as a descendant of Kentifrica, a “contested” combination of the geographies of her ancestral lands of Kentucky and parts of West Africa. A 2018 Wanlass Artist In Residency at Occidental College saw Hinkle “re-creating artifacts and sharing narratives and customs from her research archives … reconstructing a Kentifrican identity that invites a critical engagement with the intersections of collective vs. personal histories, diaspora, migration, immigration, cross-cultural exchange, and issues of geography and authority in relationship to knowledge production.”

Kenyatta A.C. Hinkle​ was born in Louisville, Kentucky in 1987. She received her BFA in Painting at Maryland Institute College of Art in 2009, and her MFA in Art & Critical Studies/Creative Writing at California Institute of the Arts in 2012. She was awarded a 2015 Fulbright Fellowship to conduct research at the University of Lagos, Nigeria.

Hinkle’s artwork and experimental writing has been exhibited and performed at The Studio Museum in Harlem, Project Row Houses, The Hammer Museum, The Museum of Art at The University of New Hampshire, The Museum of the African Diaspora (MoAD) in San Francisco, The Made in LA 2012 Biennial, The California African American Museum, The BALTIC Centre for Contemporary Art, Weingart Gallery, Occidental College, and The San Francisco Arts Commission. Hinkle’s work has been reviewed by The San Francisco Chronicle, The Los Angeles Times, LA Weekly, Artforum, Art Practical, Hyperallergic, KQED News, Ebony, The Huffington Post, The Washington Post, and The New York Times, among others.

Hinkle is the recipient of numerous awards including The Cultural Center for Innovation’s Investing in Artists Grant, Social Practice in Art (SPart-LA), Jacob K Javits Fellowship for Graduate Study, The Fulbright Fellowship, and The Rema Hort Mann Foundation Emerging Artists Award. Her writing has appeared in Not That But This, Obsidian Journal, and Among Margins: Critical and Lyrical Writing on Aesthetics.

Hinkle will be showing The Evanesced: Embodied Disappearance [Searching for Califia] in the Mexicali Biennial 2018 at Los Angeles Contemporary Exhibitions beginning on Saturday, June 9th. She is featured in the documentary Artist and Mother (Artbound S9 E7), airing Tuesday, June 12th on KCET, and screening that same day at the California African American Museum, followed by a conversation with the artists and art writer Jori Finkel. Kentifrications: Convergent Truth(s) and Realities, a catalogue to accompany Hinkle’s Wanlass Artist in Residency at Occidental College, will be published by Sming Sming Books. Hinkle’s first book, SIR (Litmus Press, forthcoming, 2018) reflects on naming as a tool for undefining the defined.