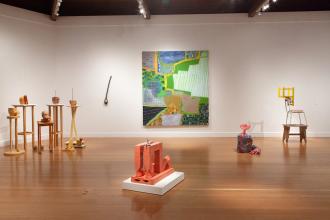 Midas: how art becomes life and life becomes art, a new Berkeley Art Center group show organized by longtime Bay Area resident, artist, and curator Squeak Carnwath, embodies so much of what is uniquely lovable about Berkeley. While parts of the Bay Area are increasingly characterized by impenetrable surfaces and sleek finishes, this side is still filled with quirky sculptures made from scrap metal and benches from old surfboards tucked in between community gardens where neighborhood jazz quartets sometimes hold impromptu concerts on a Saturday morning. The same unpretentious but irrepressibly creative sensibility reverberates throughout this show.

On display at the Berkeley Art Center is the precise opposite of the obsession with material wealth usually associated with the name Midas. Many pieces incorporate objects one might find marked “free” on a Berkeley sidewalk: an old but usable umbrella, a paint-spattered chair, a hand painted sign. In the myth, King Midas was the greedy monarch who, given a wish, asked that everything he touched turn to gold. This was lovely until he reached for his beloved daughter, turning her to gold, a metaphor for the meaningful human relations lost to the pursuit of capital accumulation. Carnwath’s exhibition, however, transforms this fable of avarice into a different allegory for how an artist can reframe an object, however humble, and thereby turn it to poetic gold.

Carnwath is a local treasure. In addition to being a renowned painter, printmaker, and UC Berkeley professor emerita, she is a beloved mentor and supporter of other local artists. She looks after them not only in life but also in death as a founder and director of the Artists Legacy Foundation, which helps artists determine what to do with their work and estates when they die. She is also the co-founder of the Roll Up Project, an installation gallery in Oakland’s Jack London District featuring both emerging and established artists. Since 2017, this gallery has offered free, walk-up access to local art.

All of the artists in Midas have also participated in the Roll Up Project over the past few years. They span diverse cultural and educational backgrounds as well as multiple generations and media. Ricki Dwyer is primarily a weaver. Linda Geary, although inspired by textiles, works mainly with paint on canvas. Maria A. Guzmán Capron draws on traditions of patchwork quilting, while Jerry Leisure crafts his pieces from wood. Sahar Khoury and the duo of Kyle Lypka and Tyler Cross each make multimedia sculptures. These artists, despite their disparate practices, are all professionals (in the literal sense). By contrast, John Moore, in his 80s, is an outsider to the art world who has made his work entirely on his own terms. Nevertheless, the artists all share a deep interest in material transformation.

In contrast to King Midas’ pursuit of a single element, the works in this show revel in the beauty and power vibrating within and between every earthly substance. Both the curation and the individual works here depend on an alchemical approach. During medieval times, alchemy was the study of the qualities and transformation of physical substances, especially the transmutation of other metals into gold. (This is, of course, exactly the power the mythical Midas sought.) Alchemists were early chemists experimenting with the building blocks of the universe, merging deep knowledge of the elements with a degree of chance and play. Likewise, the artists in this show combine seemingly incompatible textures, patterns, colors, and/or objects to see what unpredictable and potentially magical effects will arise.

To enter the Berkeley Art Center, visitors must cross a bridge and pass under Ricki Dwyer’s Conditions of Consciousness Formation, a lovely weaving made up of two distinct strips of fabric partially sewn together. Dwyer’s works in the show reflect his fascination with gravity and chance; a draped fabric will never fall precisely the same way twice. Dwyer credits Robert Morris’s felt sculptures for this line of inquiry, but in a second weaving, Untitled (After Morris), he transposes Morris’ impersonal treatment of dull, mass-produced fabric into a carefully hand-woven cloth dyed in vibrant colors. In fact, alongside his weavings, Intimacy Poem, which Dwyer composed from cut-out and rearranged lines from Morris’s 1966 essay “Notes on Sculpture Part 2,” also hangs on the gallery wall. Dwyer’s works, then, set an intimate tone for a show that feels like a fortuitous gathering of friends.

Linda Geary’s two large paintings, in concert with Dwyer’s untitled weaving, fill the gallery space with powerful energy. Geary notes that the bright colors and shapes in Flower Power 2 recall the historical moment when psychedelic designs connoted a radical rejection of the militaristic, exploitative capitalist system. Reclaiming these connotations in a new context, Geary constructs her painting like a mason, piece by piece, resulting in a composition that suggests the cellulose structures of various plants. This visual similarity points to plants’ literal power to turn sunlight into energy into cellulose. The slogan “flower power” may no longer resonate, but actual flowers exercise this power continuously and despite us. Across the gallery, a second painting entitled And a little more about how to get back is a reference to a line from a Lydia Davis story alluding to the feeling of standing on the edge of a (historical) cliff. Yet, regardless of the precarious contexts evoked, the kinetic play of color and shape in both paintings reminds us to still find joyful ways of living against the dark backdrop of current events.

While Geary’s works evoke patchwork through paint, Maria A. Guzmán Capron’s sculptures combine actual objects and/or fabric pieces of various shapes, colors, and patterns into semi-figurative pieces that never fully cohere. Sitting on the gallery floor, Bolsa (Spanish for “bag”), is made up of two plastic bags filled with clothes and spray-painted red. One implies a face and the other a massive hand so that a giant figure appears to be emerging from the ground. Caracol, made during the early days of the pandemic, is suggestive of a woman trapped within a torso, her only exit sewn shut. Reflection evokes a face peering down at its mirrored image, misrecognizing likeness as self. In each, the lively colors and garish designs wrestle with our innate pareidolia, that tendency to recognize a figure – particularly a human face – where none (fully) exists.

Transformations of and deviations from the face also characterize Jerry Leisure’s work. His eerie crowd of carved wooden heads sprouting a range of discordant elements – a duckbill, a gas mask, a cross, a ship’s sail – are both unsettling and amusing. Fortunately, these creatures all appear to be sleeping.

Meanwhile, Kyle Lypka and Tyler Cross’s Lodestone, made of ceramic and cast aluminum, distorts the other extremity of the human body, creating an uncanny table sporting two sets of human feet. (Of course, we do refer to a table as having “legs,” so the addition of feet is oddly appropriate.) The inclusion of a candle cast in metal adds one more mystery to an exhibition filled with oneiric associations.

Echoing Geary’s evocation of a cliff’s edge, Sahar Khoury’s two sculptures, Untitled (palm trees in Iraq) and Untitled (palm trees in Haiti) – made from ceramic, steel, bronze, resin, and leather – generate a sense of precarity, of homes perched on stilts that might buckle anytime. Due to the war and violence their populations have endured, the references to Iraq and Haiti may connote trauma. Yet, like Geary’s paintings, Khoury’s sculptures are fun, reminiscent of the ill-proportioned models and dioramas through which many children begin to represent the spaces they inhabit, emotionally rather than objectively.

This evocation of lived space – of the home and the studio, which for many artists are one, and especially so during the pandemic – emerges even more powerfully in John Moore’s wall of painted wood panels and mixed media pieces. Like a photo album or wall of snapshots, this wall serves as a partial document of the artist’s life, his encounters with his culture, his time, his world. References range from famous people like Charlie Parker, Nelson Mandela and James Brown to various colloquialisms we may have heard before (“The night has a thousand eyes”) but never truly considered. Each piece evokes a moment, a context, or an event that, together, transform the wall into a tapestry telling a rich life story.

Moore’s work may, in fact, be the crux of the show. Although a prolific artist, Moore rarely shows his work publicly. Instead, he has transformed his Oakland home and studio into a museum filled with his own paintings, collages, drawings, and sculptures as well as collected specimens and curios. In other words, his home, of which he is showing us a small piece, is a work of art. His transformation of his environment into an inhabitable artwork demonstrates how the line between art and mundane experience may be simply a matter of how we choose to live.

The artist’s studio is generally a liminal space between art and the daily routine, where a bunch of “stuff” may suddenly transmogrify into something unprecedented.

Carnwath, interested in how any object that enters the studio risks becoming art, asked the artists to each share a “power object” in the show, something that has inspired or simply accompanied their practice. These include Dwyer’s framed poem, a tower made from a stool and chairs that Geary has used for years to prop her canvases, a patchwork doll Capron made just for fun and fixed atop a pair of shell-shaped ceramic vases, and an old (c. 1700), weighty cannonball Leisure likes to hold. Lypka and Cross contributed two shelves of glaze tests and maquettes they refer to regularly in their practice, which allows us a glimpse of how Lodestone (and other works) came into being. Moore sent a table constructed of crushed aluminum cans. However, the object that may best encapsulate the playful spirit of the show is a chair with an umbrella attached, a Bretonian assemblage made for Esther, Khoury’s dog, who prefers to watch the artist work from the shade.

Are these objects “art”? Should we view them the same way as the proper “works” in the show? It’s impossible to say for certain, but Midas suggests that how we see (and hear, smell, taste, touch) determines what we can experience as art. Rather than seeking to transform the material world around us into profit, the works on display here teach us to (re)perceive the glory and mystery of everyday life – of being alive – that so many of us, to our detriment, have learned to ignore.