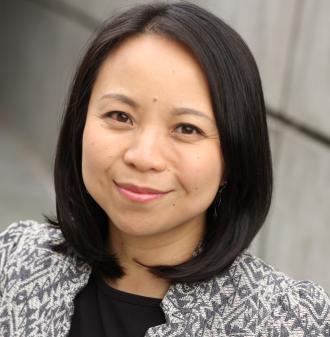 When good fortune arrives, it’s always best to have talent on tap to take care of it. Dr. Elaine Yau’s appointment as BAMPFA’s first associate curator for the Eli Leon Living Trust Collection of African American Quilts proves the point.

When the monumental treasure trove of the late Eli Leon’s collection of nearly three thousand African American quilts was bequeathed in 2018 to the Berkeley Art Museum and Pacific Film Archive, everyone knew a master curator was needed to take charge of the artwork. Yau was in the wings, having curated a retrospective in 2019 with former BAMPFA Director Lawrence Rinder of quilts by Richmond’s Rosie Lee Tompkins along with other items drawn from Leon’s collection.

“It was as the co-curator of our Rosie Lee Tompkins retrospective that Elaine truly demonstrated her mastery of this material,” says Julia White, BAMPFA’s senior curator for Asian art. “In assembling the exhibition, she brought not just scholarly rigor but a deep sensitivity and thoughtfulness to the task of illuminating the complicated story of Rosie Lee Tompkins and her remarkable body of work.”

White makes special mention of the introductory essay Yau wrote for the exhibition catalog, “The Craft and Art of Rosie Lee Tompkins,” calling it “one of the most meticulously crafted biographical essays ever written about this understudied artist.”

Yau has a bachelor of arts degree from Stanford University and a master’s degree and doctorate in the history of art from UC Berkeley. She has taught at UC Berkeley and Azusa Pacific University. Before her graduate studies and work in the Bay Area, Yau was a curatorial research assistant at the Smithsonian American Art Museum in Washington, D.C.

In her new position at BAMPFA, Yau will curate the first major exhibit of Leon’s collection, scheduled to open in August 2023. The collection includes work by more than 400 artists and quilt-making practices that extend across the United States from the Mississippi Delta to the West Coast. Artists represented include Tompkins, Willia Ette Graham, Johnnie Wade, Arbie Williams, Angie Tobias, Gladys Henry, Laverne Brackens, Sherry Byrd and, importantly, many lesser-known artists whose work has never before been featured in a prominent museum.

“There are several generational lines of quilters,” says Yau, highlighting one possible approach to exhibiting the collection. “Gladys Henry, Laverne Brackens and Sherry Byrd are a grandmother, a mother and a granddaughter. There’s an opportunity to think about how quilting as a tradition typically passed down through generations.”

Other enlightening perspectives might focus on Leon’s Bay Area collection story. He lived in Oakland, and his art collecting forays were often in Oakland and Berkeley flea markets and throughout the Bay Area African American quilting community. Yau says BAMPFA’s history of presenting abstract work makes the museum well-poised to reframe quilts as a form of abstract art and quilt-making as craft.

“There’s excitement about how the collection can enrich the strict way of thinking about abstract expression that is narrowly defined by painting, collage, sculpture. Quilting as a different medium — what does it add to that conversation?”