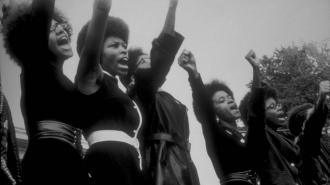 At the Berkeley Art Museum and Pacific Film Archive, a show about California’s geography begins with a wall of people. Catherine Opie’s intimate photograph of two farmworkers wrapped in a butch embrace bleeds into an early photo of Jello Biafra smashing his mouth against a microphone. His hyper-masculinity contrasts starkly with a row of women, photographed by Pirkle Jones, throwing their fists up to signal black power. These people, easily associated with the Bay Area and its unique history, are translated by the show’s narrative into economic and social landscapes, demonstrating how a geographic underpinning defines the way people create and occupy space.

Land of Promise and Peril: Geographies of California is the latest iteration of Cal Conversations, BAMPFA’s collaborative series with UC Berkeley. As members of a UC Berkeley undergraduate course, students select work from the museum’s vast collection to curate an exhibition, empowering them to bring their perspectives and political concerns to the public.

The show is primarily composed of medium-format photographs, which associate curator Stephanie Cannizzo—who supported geography professor Seth Lunine and his California geography class in designing the exhibition—explained relates to the students’ desire to feature as many artists as possible. This contributed to the show’s diverse array of artists, featuring work by Dorothea Lange, Bill Owens, Chiura Obata, Kim Abeles, Ruth-Marion Baruch and at least a dozen others.

A few standout multimedia pieces are included, such as artist Brian D. Tripp’s 1992 collage. Combining thin sheets of colored plastic, which have the reflective qualities of tinfoil, the artist spells out “they think they own the place” in reds and yellows. Eminently striking, the piece is made more interesting by its explicit relationship to geography. The hard-edge motifs in Tripp’s work reference Karuk geography, the tribe to which he belongs, and it was made to commemorate the 500th anniversary of America’s “discovery.” A favorite of the curatorial team, it centers many critical intersections of race, colonization, and resource extraction.

In student curator Jocelyn Gama’s reflection, she writes that “the metallic and crinkly silver material in Brian Tripp’s artwork ... reminds me of the aluminum-colored blankets ICE agents give children and families currently incarcerated in ICE detention centers.” She adds, “The battle is not over.”

The political necessity of addressing the ownership, and subsequent policing, of land is felt throughout the show. A miniature Victorian sits in the gallery’s center, rarified, and entrapped in a glass vitrine. Artists Kate Ericson and Mel Ziegler painstakingly wrote every San Francisco street name on the model house’s roof for Peaks and Valleys Maquette (1991). The students’ wall text interrogates who gets to live in a house in the Bay Area, and why—an all too timely question. The work brings to mind the Moms 4 Housing movement, which began in West Oakland when four homeless mothers moved into a vacant house, owned by a speculative real estate developer, to protest housing insecurity.

Looking forward, Richard Misrach’s Untitled (OF 104-91: Swimming Pool) suggests a grim future by documenting past devastation. The arresting photograph captures a placid swimming pool, framed on all sides by the ravages of the 1991 East Bay Hills fire. The image is foreboding, reminding one that speculative property development and aggressive suburbanization are no match for the laws of nature.

One lesson came, unexpectedly, from featured artist Brian D. Tripp. Upon receipt of the show’s permission form, he reproduced the legal contract and upgraded it. He made one for each student curator and wrote “they think they own the place, but we know better,” signing his name in silver marker. “Like a work of art,” observed Cannizzo.

The show’s wall text charts student thoughts as the class grappled with California’s many contradictions and posed questions about representation, identity, and technology in the state’s geography. The pedagogical importance of curating Lands of Promise and Peril is perhaps its greatest strength. “Several of my students had never been to a museum before,” Professor Lunine reflected, “and they didn’t understand that BAMPFA is their museum, they can go for free and they should feel a sense of ownership over the space. Curating this show changed that.”

'Land of Promise and Peril: Geographies of California' is on view through April 26, 2020 at the Berkeley Art Museum and Pacific Film Archive. Details here.