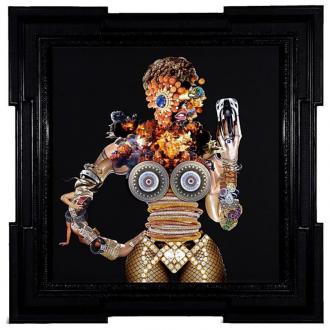 Newsome’s work is deeply invested in how images used in media and popular culture communicate distorted notions of power. He draws attention to the contributions that marginalized communities, whose culture is often absorbed and co-opted by mainstream advertising platforms, have made to Pop culture and society in general. Through his visually engaging and truly interdisciplinary work, Newsome explores the complexities of social power structures and questions of agency. During his talk, Newsome will discuss his use of the diasporic tradition of improvisation and collage as a tool to achieve abstraction. At the heart of his practice is the tenacity and resilience of marginalized communities to create globally celebrated cultural productions, despite living within what scholar bells hooks names the capitalist, imperialist, white supremacist, patriarchy. His work speaks to the power of the human spirit to reinvent and transform itself as evidenced in the Black and Queer cultural practices referenced and abstracted throughout the work.

Rashaad Newsome is a multidisciplinary artist whose work blends several practices together including collage, sculpture, film, music, computer programming, and performance, to form an altogether new field. He pulls intuitively from the world of advertising, the Internet Black and Queer culture to produce counterhegemonic works that use the diasporic traditions of improvisation and collage, to craft compositions that walk the tightrope between intersectionality, social practice, and abstraction.

Newsome lives and works in New York City. He was born in 1979 in New Orleans, Louisiana, where he received a BFA in Art History at Tulane University in 2001. In 2004, he received a certificate of study in Digital Post Production from Film/Video Arts Inc. (NYC). In 2005 he studied MAX/MSP Programming at Harvestworks Digital Media Art Center (NYC). He has exhibited and performed in galleries, museums, institutions, and festivals throughout the world including: The Studio Museum in Harlem (NYC), The National Museum of African American History and Culture (DC), The Whitney Museum (NYC), Brooklyn Museum (NYC), MoMAPS1 (NYC), SFMOMA (CA), New Orleans Museum of Art (LA), Centre Georges Pompidou (Paris), The Garage Center for Contemporary Culture (Moscow), and MUSA (Vienna).  Newsome’s work is in numerous public collections including the Studio Museum in Harlem, Whitney Museum of American Art (NYC), The Brooklyn Museum of Art (NYC), The San Francisco Museum of Modern Art, Los Angeles County Museum of Art, McNay Art Museum (TX), The Chazen Museum of Art (WI), and The New Britain Museum of American Art (CT). In 2010 he participated in the Whitney Biennial (NYC), and in 2011 Greater New York at MoMAPS1 (NYC). His many honors and awards for his work include a 2018 William Penn Foundation Grant, the 2018/2019 Live Feed Creative Residency at New York Live Arts, a 2017/2018 Pollock-Krasner Foundation Grant, a 2017 Rush Arts Gold Rush Award, the 2016 Artist-in-Residence at the Tamarind Institute, NM, the 2014 Headlands Center for the Arts Visiting Artist Residency, a 2011 Louis Comfort Tiffany Foundation Award, a 2010 Urban Artist Initiative Individual Artist Grant, and a 2009 Rema Hort Mann Foundation Visual Arts Grant.