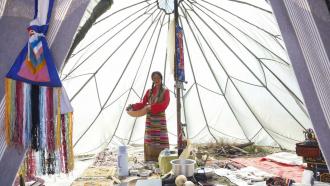 BERKELEY, CA — Tale of the Tibetan Nomad, a short film for virtual reality (VR) based on the work of acclaimed Chinese playwright Stan Lai and developed in collaboration with UC Berkeley Arts + Design, was selected to premiere at the 2020 Tribeca Film Festival, taking place online. The piece will be publicly available for home viewing through Tribeca Immersive’s Cinema 360 program in partnership with Oculus, starting April 17, 2020. Bay Area filmmaker Carol Liu wrote and directed the original VR piece, adapted from Lai’s award-winning play, A Dream Like A Dream. Tale of the Tibetan Nomad was developed in cooperation with theater director and playwright Stan Lai, and Oakland-native costume designer Sandra Woodall, and stars Tsering Dorjee of Oscar-nominated film, Himalaya. The film was sponsored by Berkeley Arts + Design, Coleman Fung, and funded by Berkeley alumni Charles Huang and Liliane Qian.

The virtual reality film is the first cross-disciplinary collaboration with a major public university and renowned theater director and playwright, Stan Lai – described by the BBC as “the best Chinese language playwright and director in the world.” Recent UC Berkeley graduate Kris Hsu assisted in leading the production of the piece as producer. In addition, UC Berkeley undergraduate students collaborated with the artists on the production of the VR piece, which was filmed locally on UC Berkeley’s campus and the Berkeley hills. Liu also led several production workshops for students in the Berkeley VR club, Extended Reality at Berkeley.

“Developing a VR piece about Stan’s work provided an amazing opportunity to bring together students from different Berkeley communities – students who are excited about the intersection of technology and the arts,” said Shannon Jackson, Associate Vice Chancellor of Arts + Design and Hadidi Professor of Arts and Humanities at UC Berkeley. “With the release of this exquisite VR film at the Tribeca Film Festival, we hope to deepen the global conversation around spirituality, technology, and global citizenship on a broader scale.”

Tale of the Tibetan Nomad tells a dreamlike story of a Tibetan shepherd searching for his lost love. The VR piece takes the viewer through several layers of the fictional world, drawing on themes that are common to Lai’s work – multiple levels of reality, circularity, and frame stories. Moreover, the 360-degree image of the VR experience references the signature circular “lily pond” configuration of Lai’s theater productions, in which the audience sits in the middle while the story plays out all around them.

“The shepherd’s journey represents the essence of the idea of going through dreams within dreams in order to awaken. We can especially relate to this right now, given the state of the world we find ourselves in” said Liu. “When we reawaken and collectively reenter the world, how will we live our lives differently? I hope the journey of the Tibetan nomad inspires viewers to a new appreciation of their lives.”

Tale of the Tibetan Nomad will be available online through the Oculus TV app for Oculus Go and Oculus Quest from April 17 to April 25, 2020. For more information visit: https://www.tribecafilm.com/

Berkeley Arts + Design features, fortifies, and mobilizes existing excellence in the arts and design at UC Berkeley, while fostering dynamic collaboration, innovation, and public access across all arts and design fields, on campus and in public life. Learn more at https://artsdesign.berkeley.edu/.

Carol Liu is an independent filmmaker, VR creator and founder of U-Ma Studios. Carol's films and VR projects revisit historical narratives and the untold stories of marginalized figures. She is the winner of the SF Film Rainin Screenwriting Grant for her upcoming feature, Goddesses of Nanking. Other original films she has written, directed and produced include award-winning humanitarian documentary Restoring the Light and screenplay Leftover Woman. Her VR experience, Marie Antoinette VR, delves into the true history behind the ill-fated, historically misrepresented queen and was presented at Cannes Film Festival's NEXT Marché, Oculus Connect, and was an official selection of Busan International Film Festival. Carol received her BA from Stanford University in English Creative Writing and an MFA in Film Production from New York University's Tisch School of the Arts.