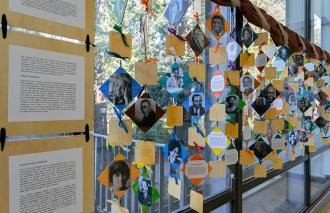 UC Berkeley’s Student Learning Center, or SLC, hosted its interGeneration400 initiative Saturday, which celebrated Black history and was open to students and the public.

The César E. Chávez Student Center was packed with more than 60 people. The all-day event featured speakers and panels including discussions on the global legacy of slavery, such as the panel, “Unapologetically Black: Thriving in the Face of Anti-Blackness,” and honoring Black legacy. There were also workshops centered on Black culture and experiences. The event featured a dedication ceremony of a writing lounge to VéVé Clark, a former campus associate professor of African American studies.

“We felt motivated … to hold (this event), commemorating and celebrating 400 years of African American history as it was decreed through the 400 Years of African-American History Commission (Act) in 2018,” said Serena Le, the SLC’s Discovery Program director. “We felt that it was appropriate that the SLC … did something to acknowledge not just Black history but the legacy and impact of slavery on our communities and (to) provide ways forward for the kind of mentorship and pedagogy we would like to see on this campus and broadly in the community.”

Le added that the campus started an initiative called 400 Years of Resistance to Slavery and Injustice. Saturday’s event was also the launch project of the Discovery Program, which the SLC designed to support project-based learning and connect students to resources they need to make an impact, according to Le.

The initiative also showcased works of art. According to artist and curator Rosalind McGary, the collection was created by artists who identify as Black and either were directly related to UC Berkeley’s campus or are locals to the Bay Area.

Khuyen Nguyen, the SLC’s executive associate director, added that while the 400 Years of African-American History Commission Act is ending in June, they seek to make sure the event is not just “gestural” and will continue to make an impact and acknowledge the legacy of slavery beyond this anniversary.

The event organizers were intentional in the inclusion of various cultures and in underscoring the importance of understanding that slavery is not just part of Black history, but American history as a whole, according to Laydei Woodard, the co-director of the SLC Writing Program. She added that they wanted to celebrate “Black resilience and excellence,” which she said she feels is often left out of the conversation.

“I’m a first-year medical student and I’m really interested in doing work on anti-racism in medicine,” said Aminta Kouyate, a UC Berkeley student. “I wanted to start Black History Month with remembrance and celebration of the beauty and joy of the Black community.”