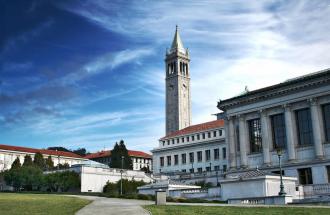 The Asian American Community at UC Berkeley Takes a Stand

Asian Americans across the United States rejoiced when Kamala Harris — the daughter of South Asian and Jamaican immigrants — was sworn in as the vice president. In the Bay Area — where the then vice president-elect spent her childhood and began her extraordinary political career — the results of the 2020 election set off celebrations as jubilant supporters took to the streets. In a triumphant public statement, the University of California, Berkeley commemorated Harris’s “biracial, multicultural roots” and emphasized her connections with UC Berkeley. After all, Shyamala Gopalan and Donald J. Harris, both immigrants from former British colonies, had not only received their PhDs from UC Berkeley, but had also met at a campus study group on race in America in the fall of 1962. Already in 1962, the critical movements that would shape the radical politics of the next few years could be sensed. In 1968, these movements would culminate in the formation of the third world Liberation Front (twLF), who demanded representation and recognition in university curricula and the replacement of the term “Oriental” with “Asian American.” In UC Berkeley, striking students of color were first met with force and later assuaged with the establishment of an ethnic studies department.

Fast forward to 2021. It is business as usual in the Bay Area. An 84-year-old Thai American, Vichar Ratanapakdee, is murdered in the Anza Vista neighborhood of San Francisco; Filipino American Danny Yu Chang is attacked and partially blinded in a brutal Mission District stabbing. And then six Asian American women are murdered in a series of mass shootings in Atlanta, Georgia on March 16. According to a report compiled by Stop AAPI Hate, 3,795 anti-Asian hate incidents have taken place since the beginning of the pandemic. About 44% of these occurred in California. In the Bay Area, the steady acceleration of xenophobic hate crimes, murders, and deliberate violence against Asian and Asian American communities generates an outcry. On March 17, UC Berkeley Chancellor Carol T. Christ circulates a timely message in support of UC Berkeley’s large Asian and Asian American community.

In part because of its location, UC Berkeley has been central to Asian American history in the United States, as has the University of San Francisco. Which is also why the chancellor’s well-worded message resonated with many on campus. The sincerity of her verbiage, of course, has always been somewhat out of step with administrative action and Asian American representation in a campus where 39.8% of the undergraduate students population identified as Asian/Pacific Islander in 2019-20 (compared to 28.4% white) while only 17% of the faculty are of Asian origin (compared to 77% White in 2020). This disparity in representation appears doubly troubling given UC Berkeley’s place in Asian American history and the institution’s location within the largest community of people of Asian origin in the United States. The slippage between the rhetoric of solidarity and representational apathy was recently exemplified by a proposal to eliminate UC Berkeley’s South/Southeast Asia Library — the only library in the United States devoted exclusively to the South and Southeast Asian region as a whole — allegedly in order to better serve “user communities” (which ones?) and increase library efficiency. (Read the proposal here). As a minor campus library — both in terms of square footage and the community that it serves — the South/Southeast Asia Library apparently attracts the least foot traffic. In the eyes of the administration, this very same minority status purportedly made it an apropos site for redaction by eradication.

The minor, however, resists. Within days, a petition initiated by students accrued 18,000 signatures; The Daily Californian, a student-run newspaper, labeled the plan “particularly cruel” especially in face of the recent anti-Asian violence; departments invested in the study of South and Southeast Asia appeal. The University Library buckled and withdrew its plan on March 22. The Library’s official statement yet again emphasizes its “value as a beacon of inclusion.” We have been here before. As Professor Lok Siu, my colleague in the Department of Ethnic Studies, recently wrote: “Anti-Asian violence is an American tradition.” We might remember that “Anti-Hindu” riots had erupted in 1907 in Bellingham, Washington followed by similar brutal attacks on South Asian migrants in California. In 1910, The San Francisco Call published a caricature with Uncle Sam holding a “Hindu” — labeled incompetent and indolent — by the seat of his pants while asking the British Viceroy of India to “Take this impossible thing back! We dont [sic] want it over here!” Despite such odds, UC Berkeley attracted students from the region as early as the 1900s. Their numbers were small in the beginning. But their anti-racist activism was nonetheless notable, as indicated by a report published in The San Francisco Call in 1908. By 1913, the campus had become a hotbed of global anti-imperial politics with the formation of the Pacific Coast Hindustani Association in San Francisco whose members not only agitated against colonialist British policies back home but simultaneously protested racism on campus. Even as precarious subjects with limited political agency, brown students did not hesitate to call out racism and xenophobia on campus, in the Bay Area, and in the United States. They took seriously — perhaps not without naïveté — the promise of freedom in the United States, itself a former British colony.

The subsequent century-long history of political mobilization by students of color on campus—from early 20th-century anti-imperialism to the twLF, a coalition of African American, Mexican American, Asian American, and Native American students — is inspiring. This same history would bring Shyamala Gopalan to UC Berkeley at the age of 19 where she, like many other migrants from South and Southeast Asia, would meet kindred spirits from across the world united by the debilitating experience of growing up under colonial rule. This very same history would galvanize my own imagination when I joined the History of Art Department several decades later to teach South and Southeast Asian art. Although the arts of South, Southeast, and East Asia had been taught at UC Berkeley since the 1960s, I would be the first faculty member of Asian origin to do so.

Of course, the presence of Asian and Asian American faculty does not in itself assuage structural inequity; indeed, there is much more to be said about race and representation and much work to be done. Edward Said had once described the American university as the last remaining utopia, one that we now recognize as being simultaneously substantial and fragile. Perhaps as a public research university, UC Berkeley, more than other peer, private universities, offers space for conversations on social justice. But this utopia, we now also know, needs to be defended, even from itself, as the corporate logic of workflow and efficiency become buzzwords for higher education in the United States and leads to the concomitant erasure of spaces for minority communities.