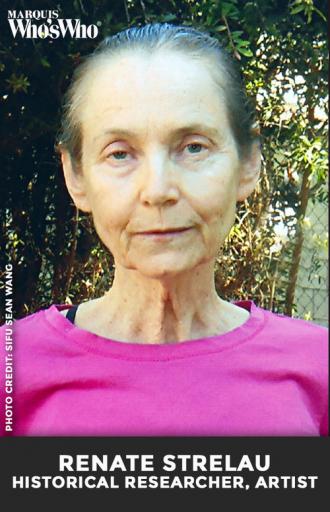 Renate Strelau Celebrated for Excellence in Historical Research and Art

By
Marquis Who's Who

RESEDA, Calif., Sept. 9, 2021 /PRNewswire/ -- Renate Strelau is a distinguished biographee of Marquis Who's Who. As in all Marquis Who's Who biographical volumes, individuals profiled are chosen from among a pool of the most prominent professionals and are selected on the basis of current reference value. Factors such as position, noteworthy accomplishments, visibility, and prominence in a field are all taken into account during the selection process.

Drawing on more than 50 years of artistic brilliance, Ms. Strelau's illustrious career derives from her unique journey as both a historical researcher and an artist. A native of Germany, she immigrated to the U.S. alongside her father, mother and brother in 1960 and began undergraduate study at the University of California, Berkeley in 1969. The intense political dialogue circulating throughout the Northern California campus played a huge role in the development of Ms. Strelau's intellectual and artistic gifts. It was at UC Berkeley where she participated in her first solo exhibition. She earned a Bachelor of Arts in political science from the aforementioned university in 1974.

Ms. Strelau then pursued graduate study at the School of Advanced International Studies, Johns Hopkins University, in Washington D.C., earning a Certificate of Arabic Language Proficiency (oral and written) in 1976. As a research assistant at the Iranian Embassy in Washington D.C., from 1976 to 1980, she analyzed world news and wrote features for the embassy's diplomats and international audiences. Her last day at the embassy was during the Iranian Revolution, when the United States severed diplomatic relations with Iran.

To deepen her political understanding, Ms. Strelau again turned to graduate studies. She earned a Master of Arts in U.S. diplomatic history from American University in Washington, D.C. in 1985 and from the same university she earned a Master of Fine Arts in Painting (human figure) in 1991.

Ms. Strelau conducted path-breaking research that explored the relationship between art and international relations. She presented her work at international scholarly conferences in Annapolis, Maryland, in 1995, and in Minneapolis, Minnesota, in 2007. Ms. Strelau highlighted abstract expressionist art of the mid-20 th century, centered in New York, as a catalyst for raising the role of art in the flow of international relations. Her conclusions posited art as a continuum of peace more powerful than war.

Ms. Strelau found tremendous artistic success while exhibiting her art at multiple solo and group shows. In a group show in Putttaparthy, India, in 2015, her portrait photography appeared in a large montage overlooking a garden. Her love for travel took her to, for instance, Spain, Morocco, Italy and Mexico. These adventures influenced and nourished her collaborative instincts, especially during climate change. Her current work explores the interconnectivity of all. As one of the most distinguished artists to have attended American University, Ms. Strelau's drawing, A Rose, is currently housed at its museum.

About Marquis Who's Who®:

Since 1899, when A. N. Marquis printed the First Edition of Who's Who in America®, Marquis Who's Who® has chronicled the lives of the most accomplished individuals and innovators from every significant field of endeavor, including politics, business, medicine, law, education, art, religion and entertainment. Today, Who's Who in America® remains an essential biographical source for thousands of researchers, journalists, librarians and executive search firms around the world. Marquis® publications may be visited at the official Marquis Who's Who® website at www.marquiswhoswho.com.