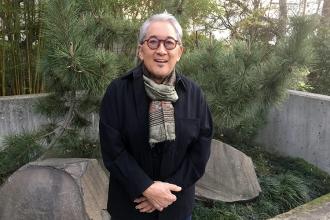 Philip Kan Gotanda is a professor in UC Berkeley’s Department of Theater, Dance and Performance Studies and one of the most prolific playwrights of Asian American-themed work in the United States. In the first episode of a three-part series, Gotanda talks about growing up in Stockton, California, after World War II and the anti-Japanese racism that he couldn’t name as a child, but that he’d go on to write about as an adult.

Today’s story is about Philip Kan Gotanda. He’s a professor in UC Berkeley’s Department of Theater, Dance and Performance Studies and he’s one of the most prolific playwrights of Asian American-themed work in the United States.

In the first of a three-part series, Gotanda shares how growing up in Stockton, California, after World War II with an undercurrent of anti-Japanese racism shaped the way he felt about himself and would influence his work later on.

Philip Gotanda: I grew up in Stockton, California, in the ‘50s and ‘60s, way back when. At that time, there was a whole vibrant Japanese American community — you went to church, you socialized. My father was a doctor. So, it was one of these things where I felt always proud because they would call my father “sensei.” It was certainly, it felt like it was a really good childhood and upbringing.

When Gotanda got older, he and his family moved to a neighborhood where most people were white. And his mother said something to him one day that made him realize that things maybe weren’t quite as good as they seemed.

Philip Gotanda: I was going to go outside to play with my friends, who were all white, and my mother, before I went out, said, “OK, Philip, you can have white friends. You can have them, and they’ll play with you, and you’ll do things together. But if anything bad happens, they’ll turn on you. Now, go play with your white friends.”

So, it kind of sums up this kind of ambivalence that you are raised with — that there’s something amiss, something historically happened, that is actually infecting you.

His parents had been among the 120,000 Japanese Americans who were incarcerated by the U.S. government in internment camps after Japan attacked Pearl Harbor in Hawaii in 1941 during World War II.

I wasn’t aware until later about how much racism they were encountering, or anti-Japanese sentiment, hate, because of the war. And so, that was always part of growing up, but I wasn’t aware of it, I couldn’t name it, as it were.

I’ve written about the society of internalized racism — that you actually may not even know is there, but it literally is part of the land, and it comes up from the land and infects your body and it weakens you because it makes you sort of buy into, in some way, the racism.