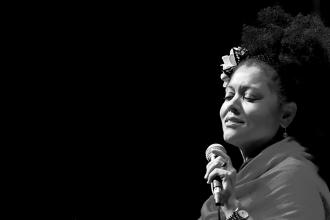 Kim Nalley graduated in May 2021 with a Ph.D. in history. In her dissertation, “G.I. Jazz,” she looks at African Americans as jazz artists, as well as occupiers, in post-World War II Germany.

I grew up in New England in the tri-state area during the height of the crack epidemic. I moved around a lot. I definitely had a hard life. You know, not having food at the end of the month or not having lights or gas or hot water — those are the kind of routine things that I grew up with.

As a Black woman, there were limited opportunities for what people wanted to see me do. I stood in line for a bunch of auditions where I wasn’t Black enough on stage to get the Black parts, and I wasn’t white enough to get the token white girlfriend part.

Before I had kids, I used to describe my life as a commercial: When I was on stage was when the actual living began, and the rest of my life was a commercial. I love singing. It makes me feel great. The older I get, the more giving I get. I’m at an age now where most people are younger than I am, so I’m expected to guide them in the ways of the old people.

I’ve lost so many wonderful people this last year. And part of it is, as a jazz musician, when you’re 20 years old and your best friends are 40 and 50, some of it’s to be expected. But this was just a very difficult year. We lost some of the greatest jazz musicians who ever walked the earth. And I find myself just trying to think and remember everything they’ve taught me so that I can pass it along to the next generation.

I have always admired Ella Fitzgerald, Billie Holiday, Sarah Vaughan, Nina Simone and Dinah Washington. As a matter of fact, I love Dinah Washington so much that I can’t even listen to her because then I’ll try to sound like her, because she’s just so amazing. Oh, my goodness. I love her so much. I’ve always loved Dianne Reeves, without a doubt, because she’s not stuck in a style. She doesn’t treat jazz like it’s a museum piece.

I also really love what people are doing right now. My big girl crush is on Camille Thurman. She’s still in her 20s. She plays the saxophone, and she also plays with the Jazz at Lincoln Center Orchestra with Wynton Marsalis. Sometimes I go, “Why am I singing? I might as well just quit because she has everything.”

When it comes to the audience, I think about where I want people to be at a certain point of time. Now that I’ve been a club owner — I owned Jazz at Pearls in San Francisco from 2003 to 2008 — I have a different take on things. So, there’s an instrumental for the band to get warmed up. Then, there’s an opener — something that’s easy for me to sing that has a good-time feel.

And then, at some point, you need a tour de force, which would be the high point of the evening. You need a song that’s emotional. I need a song that gets us all on the same side, so they can sit and think. And then Duke Ellington. You’ve gotta have a Duke Ellington inside there. And you need a closer. I need to make a setlist that day, and even then, it might change because something might happen between the morning and night. Having that flexibility is very important to me.

I just think that jazz means great musicianship. Jazz has infiltrated itself into the fabric of popular music. But I don’t think there are as many songs that are as good as songs were back then. I want to feel more complex emotions from my music. If I have to sing a lyric, I need to believe the lyrics.

An album of mine that I really like is Blues People. When I did it, I was very influenced by Amiri Baraka. Dr. Waldo Martin from the history department at UC Berkeley wrote the liner notes. At the time, it was very controversial. I was dealing with the Black experience in the United States. One of the songs I wrote was called, “Big Hooded Black Man,” which was about Trayvon Martin. When I wrote it in 2012, people weren’t ready for it.

Now, it’s been almost 10 years since Trayvon Martin died and a year since we saw the horrific video of George Floyd’s death. In this past year, Blues People has been enjoying a certain renaissance. There’s more awareness about race, there’s been more dialogue on race this year. And there have also been more lists of essential Black protest music — Blues People was on one of Oprah Winfrey’s lists. I’m just so glad that it’s finally getting somewhere and that people are listening to what I’m trying to say.

And it’s also a lesson in protest music: that the people who we idolize for doing these wonderful protest songs, they weren’t popular at the time. They were vilified. When Nina Simone did “Mississippi Goddam,” they broke the albums and sent them back to the record label.

I think it’s pretty clear-cut now, people agree, that there is no reason that Trayvon Martin should have died, but when I performed “Big Hooded Black Man,” some people walked out. Some people tried to get me fired from gigs or not hired again. People were like, “I came here to have a good time.” It’s like, “It’s one song. I deal my entire life being Black. I’m so sorry that you had to deal with two minutes and 30 seconds of feeling uncomfortable. So sorry.”