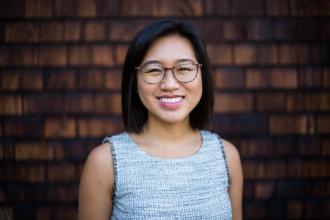 By
UC Berkeley School of Journalism

Kristen Hwang’s thesis documentary, “When They’re Gone,” about humanity’s fragile dependence on nature and the consequences of industrializing honey bees for crop pollination, has won the top honor for student documentary filmmaking in the 48th Student Academy Awards.

Hearing the news, Hwang said, “Never in a million years could I have imagined my film being honored like this. It feels surreal to be recognized among so many other incredible up-and-coming filmmakers. I am so grateful to my beekeepers for sharing their time and stories with me, and I am indebted to my peers and professors at the J-School for their guidance and support throughout this endeavor.”

The documentary weaves the urgent story of the disappearing bees with the personal stories of migratory beekeepers and their quest to maintain their livelihoods, noted Jennifer Redfearn, head of the School’s prestigious documentary film program.

“It’s a gorgeous film that rewards viewers with its depth, striking visuals, and patient storytelling. I’m thrilled that the Academy is honoring and celebrating Kristen’s film with this prestigious award, and I couldn’t be more excited for her today.”

More from our August 4, 2021 story about Hwang being named one of seven finalists:

The project dates back eight years to a TED Talk she heard by entomologist Dennis VanEngelsdorp, entitled “A plea for bees.” Hwang said something he mentioned in his talk stayed with her years later. In addition to describing the stressors on honey bees, like habitat loss, pesticides, lack of diverse food sources, and parasites, he described how a unique piece of Americana was in jeopardy: The migratory beekeeper who traveled cross country, hives in tow, to pollinate the nation’s crops, many having done so for generations.

Without them, she came to understand, our food systems would fail, yet the very industry that employs the beekeepers was also harming the bees. It would be a difficult story to unpack even in a non-pandemic year. She knew the final cut was a success, but getting the Oscar news, she said, was “a shock.”

“I was so honored that my film was recognized by The Academy,” said Hwang, only the third Asian, female director/producer nominated for the Student Academy Awards in Berkeley Journalism’s history. “As a young filmmaker, I could not have done it without the support of Prof. Jennifer Redfearn and editor Mike Shen who guided me and painstakingly broke down the complex structure of the film’s scenes and sequences weekly. It all coalesced. I’m also grateful for the other six filmmakers in my cohort who all gave their feedback on each other’s projects each week, and Brian Wollitz (‘21) who shot the drone footage in the Central Valley.”

Hwang, who grew up in California, explained that despite our best efforts to control and shape our surroundings, disrupting nature’s carefully designed ecosystems carries weighty consequences. Her film casts a spotlight on industrial agriculture’s reliance on honey bees for-hire in order to produce crops.

“The film’s four characters struggle to transport enough healthy bees to California’s Central Valley to pollinate the almond orchards–the mecca of migratory pollinators,” Hwang said. “Each character represents a small piece of an industry that brings nearly every bee and beekeeper in the country together to feed the world, their bees equal parts necessary and disposable.”

“Kristen singlehandedly produced, directed, and shot her film wearing a bee suit and a surgical mask while also completing a dual masters degree in journalism and public health,” said Jennifer Redfearn, head of the School’s prestigious documentary film program. “I couldn’t be prouder of what she accomplished and I’m so thrilled that the Academy is recognizing her work.”

“Kristen Hwang’s documentary short artfully presents a critical environmental issue through the lives of migratory beekeepers, a career many of us had never heard of,” said Geeta Anand, dean of Berkeley Journalism. “It was beautifully filmed and made science accessible. We’ll all be rooting for her.”

In 2017, grads Brad Bailey and Jason Hanasik were named finalists for Bailey’s, “Hale,” and Hanasik’s, “How to Make a Pearl.” Bailey went on to win the gold for documentary. In 2016, producers Melina Tupa and Daphne Matziaraki were both nominated, and Matziaraki took home the top prize.