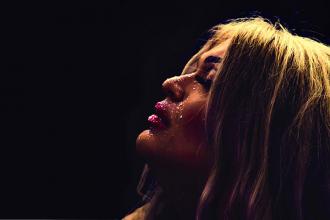 Growing up in Norfolk, Nebraska, there weren’t a lot of people of color. Often the main interactions people had with communities of color were through stereotypes they saw in media and entertainment.

Kids at my school would call me “Manny” because I reminded them of this young  Colombian boy on the TV show Modern Family. My family is actually from Mexico, but they lumped all Brown Latinx people together. And it was like I had to be this person, to fit into this box they created for me, in order to gain acceptance.

As a queer, plus-sized, low-income person of color, there have been countless times where I have been made to feel this way. But for many of us in the queer community, finding art and content that reflects our daily lives gives us a sense of ownership over our unique experiences.

Through media representation, people can also understand the queer community and our experiences on a deeper level. But I don’t really feel like I see myself fully represented in mainstream art and entertainment.

While there may be quite a few different ways we are portrayed on television shows, in music and on Broadway, we are often being represented as singular identities — reduced to the most commodified versions of ourselves.

And that’s my problem with a lot of queer representation: Do we really hold our own stories in the public space, or are they portrayed just to make the same people in power more money?

To reclaim power over our stories, we need to share them ourselves.

I was born in California’s Central Valley, but my family moved to Norfolk when I was 1.  For the majority of my childhood, my father wasn’t with me because he had been arrested when I was 4. After he was released, he was deported to Mexico, where he and my mother are originally from.

My mom had to raise the eight of us by herself. She worked nights cleaning one of the local supermarkets. It was a hard job.

She would come home sometimes at seven in the morning and still have to take care of us, cook, clean and sleep during the day before waking up and going back to work. I’m so grateful that she pushed through to do everything she possibly could to make sure we always had a roof over our heads and food on our plates.

As the youngest sibling, I understood what being low income meant for me at a young age. On the first day of kindergarten, I remember walking up to the school and telling myself, “If you ever want to go to college, you have to find a way to pay for it on your own.”

I would work jobs at fast-food restaurants, join after-school clubs and take the hardest classes that I could. But in a predominately white school, it felt like, for some people, my skin color equated to not being smart, not being good enough and not being expected to go to college.

I remember a math teacher once telling me that I was going to end up homeless, working at McDonald’s and living under a bridge.

Despite being discouraged, I was an exceptional student. I earned A’s and really thrived academically. But in social settings, being plus-sized, low income, queer and Brown was an uphill battle. I dealt with being bullied a lot.

In the Mexican community, families are heavily Catholic, and often there is not a lot of tolerance or acceptance for LGBTQ+ people. My family was pretty involved with the church community. My mom even offered to help out our pastor and his pregnant wife by cleaning their home, and I myself even went to church camp for many summers.

Being so young, I struggled with the internal battle of what I was taught through religion and the queerness around me. I didn’t know how to hold these two pieces that felt so polarizing.

But that made me more aware of my own personal identity.

I first came out, or at least tried to come out, when I was in the sixth grade. I vividly remember walking into my mom’s room, bawling my eyes out.

“I like girls and boys,” I told her. It wasn’t until freshman year of high school, after a bad breakup, that I finally texted all of my siblings that I was bi. I remember one of my brothers texting me back saying, “I don’t care what you are. You know we still love you.”

Knowing I had my family to rely on in that way was so important for me. And to this day, they still support me.

For a lot of my family, art came pretty naturally, and it was around the house in one way or another. Music has always been a passion of mine. I would sing in choir clubs and groups throughout grade school and high school. But I learned very quickly that I was never going to be featured or chosen as the front of any songs we performed.

Being queer in Norfolk, I was unlucky in the sense that from the way I carry myself, you can tell what I am: There isn’t much that I’m hiding. And I didn’t exactly fit the mold of what most choir directors wanted.

I bring my identities to any space I am in. Even if I don’t intentionally do it. And me being who I am is political, because people have made it to be that way. So, in order for me to exist and thrive, I am forced to take up some of that action of being political.

My sophomore year, I restarted the Gay Student Alliance in our high school — after it had been disbanded over a decade before — as a place to build community with other queer students and staff. While there was some acceptance of the group, other students started a straight alliance and threatened to meet in the same room, and at the same time as us, to purposely drown us out.

Fortunately for me, my family and I would end up moving to Modesto, California, my junior year. In California, I definitely wasn’t as alienated because of my race. Discrimination around sexuality and gender existed, but it was more hidden.

Something that really impacted me was the 2016 Trump presidential campaign. There was a lot of hatred and racism being outwardly expressed in the area. I remember at one point riding my bike home from school, and this truck pulled up next to me, and this group of men started yelling racial slurs and throwing rocks at me, breaking the chain on my bike.

I had to walk home the entire way back, bawling my eyes out.

Although I wasn’t old enough to vote at the time, I signed up to work the polls that election because I felt like I needed to be involved. I also lost quite a few friends for openly being against Trump and cut off some friends because I felt like, what’s the point of being friends with someone that doesn’t support me having rights as a person of color, as a queer person, as all the things that I am?

That definitely was a kind of rude awakening right before college, that the personal would always be political for me.

My freshman year at Berkeley, I lived in the UNITY Theme Program and performed in their annual drag show as KaiAnne Pepper. This program put me on my path to working for the Gender Equity Resource Center, as it allowed me to merge so many of my skills and passions.

I’ve been lucky enough to find my own community within Berkeley that is expansive and really inclusive. But there is still a struggle and work to be done with the atmosphere as a totality. There are so many instances of queer and trans students being made to feel uncomfortable and unsafe due to students still making transphobic and homophobic comments in class and around campus.

With that said, I don’t want to deter people or sound like Berkeley is the scariest place, because that’s not true. I’ve gotten the opportunity to meet LGBTQ+ center directors from across the country through Berkeley, and some of those campuses didn’t even have a permanent physical space to meet, let alone programs like UNITY and GenEq.

So, I think if you look for the community, you’ll find it.