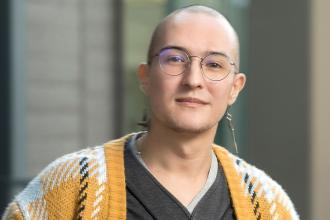 Artist among us: Berkeley Haas highlights staffer for Pride Month

There’s something special about UC Berkeley staffer Emeric Kennard’s artwork, as Kim Girard, a writer and news editor in the Berkeley Haas communications office, discovered when she recently tracked down the talented visual artist and illustrator for an interview that helps celebrate Pride Month.

Kennard, who prefers the pronoun “they,” is the experiential learning project coordinator for the Berkeley Haas MBA for Executives program. They support the logistics required for these MBA students’ off-campus, immersive courses in Silicon Valley, Washington, D.C., and in other business hubs around the world.

But when Kennard is off campus, they’re creating award-winning art that tells stories reflecting their childhood in Oregon’s Willamette Valley and Kennard’s life as a mixed race, third-generation Korean who identifies as queer, nonbinary and transgender.

“When I look at Emeric’s art, there is something so profoundly different, something so special, about it,” says Girard. “I responded to it immediately and just wanted to go back and look again. There’s a dreaminess to it, and movement and an ethereal strangeness.”

Girard says she asked Kennard to choose four recent pieces of their artwork and to talk about them for her June 29 story on the Berkeley Haas Newsroom site. Below each illustration, Kennard tells the story about it — how it came to be, what’s depicted and what understanding and feeling Kennard is trying to convey.