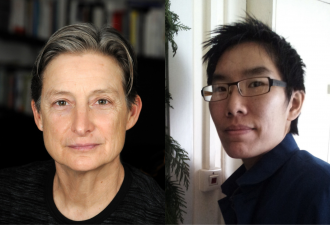 Judith Butler and Mel Y. Chen on Gender Politics and Pandemic Time in conjunction with the BAMPFA exhibition New Time: Art and Feminisms in the 21st Century

Judith Butler and Mel Y Chen extend their exhibition catalogue conversation Gender in Time to the evolving temporalities of the Covid-19 pandemic. They will discuss a range of concerns that the pandemic has highlighted, including shifting challenges for women and racialized queer, trans, and disabled communities; queer and crip time; differing valuations of productivity, and the transformations of regimes and cultures of care in the pandemic.

This event is held in conjunction with the BAMPFA exhibition, New Time: Art and Feminisms in the 21st Century.

Presented by the Berkeley Art Museum and Pacific Film Archive.

Judith Butler is Maxine Elliot Professor in the Department of Comparative Literature and the Program of Critical Theory at UC Berkeley. Her work been been influential in the fields of political philosophy, ethics, third-wave feminism, queer theory and literary theory. Butler is the author of numerous books that have been widely translated, among them The Force of Non-Violence; The Psychic Life of Power: Theories of Subjection; Bodies That Matter: On the Discursive Limits of “Sex”; Gender Trouble: Feminism and the Subversion of Identity.

Mel Y Chen is Associate Professor in the UC Berkeley Department of Gender and Women's Studies, and Director of the Center for the Study of Sexual Culture.  They are the author of Animacies: Biopolitics, Racial Mattering, and Queer Affect (2012), and are currently completing a book, Chemical Intimacies, about intoxication’s role in the interanimation of race and disability in histories and legacies of the transnational nineteenth century. Elsewhere they have written on slowness, gesture, inhumanisms, transgender, cognitive disability and method. They are part of a small and sustaining trans and queer of color arts collective in the San Francisco Bay Area.