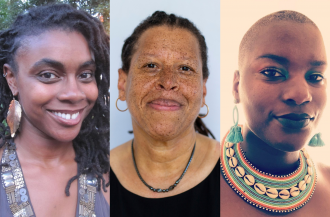 Black feminist thought has been a resource for empowerment of language and creative disruption, used for personal and political transformation. Hortense Spillers’s landmark essay “Mama’s Baby, Papa’s Maybe: An American Grammar Book” (1987) is an exemplar of this radical tradition; a 2006 conversation about it with Spillers and others is reprinted in the New Time catalogue. An analysis of the Black woman in cultures, histories and literatures, the essay is the inspiration for this conversation, which will build on her enduring insights and explore the labor of Black feminist artists to create a new vocabulary that imagines the human beyond the constraints of heteronormative white supremacy.

Presented by the Berkeley Art Museum and Pacific Film Archive.

Courtney Desiree Morris is a visual/performance artist and assistant professor of Gender and Women’s Studies at the University of California, Berkeley. She is a social anthropologist whose work focuses on black women’s social movements in Latin America and the Caribbean, environmental politics in the African Diaspora, and black visual cultural production. She is currently completing a book, To Defend this Sunrise: Black Women’s Activism and the Geography of Race in Nicaragua. Her research has been published in American Anthropologist, the Bulletin of Latin American Research, Journal of Women, Gender, and Families of Color, NACLA: Report on the Americas, make/shift: feminisms in motion, and Aster(ix).

Art historian Jacqueline Francis is Associate Professor and Chair of the Graduate Program in Visual and Critical Studies at California College of the Arts in San Francisco. She is the author of Making Race: Modernism and “Racial Art” in America (2012) and co-editor of Romare Bearden: American Modernist (2011). She has published essays in exhibition catalogues, including Among Others: Blackness at MoMA (2019), Joan Jonas Is on Our Mind (2017), and Procession: The Art of Norman Lewis (2015), and in scholarly journals such as Kunst und Politik: Jahrbuck der Guernica-Gesellschaft (2018) and Radical History Review (2009).

Kenyatta A.C Hinkle is a multidisciplinary visual artist, writer, healer, and performer. Her practice fluctuates between collaborations and participatory projects with alternative gallery spaces within various communities, to projects that are intimate and based upon her private experiences in relationship to historical events and contexts. Her practice serves as a bridge, merging the intersections of art, activism, spirituality and healing as tools for retrieval. Her healing practice consists of being a catalyst for retrieval through the usage of reiki, sound healing, divination, channeling and mediumship. Her artwork has been reviewed by LA Times, Artforum, Huffington Post, and New York Times. She is the author of Kentifrications: Convergent Truth(s) & Realities published by Occidental College and Sming Sming Books and SIR, published by Litmus Press.