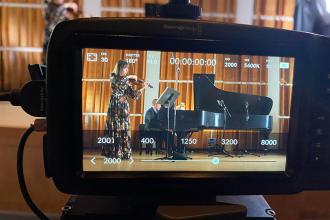 It’s not every day that UC Berkeley students get to spend an evening with cellist Yo-Yo Ma. Or watch a concert recorded at Louis Armstrong’s historic home in Queens, New York. Or ring in the new year with original performances by world-class soloists, jazz artists and chamber ensembles.

But this fall, they will — with Cal Performances at Home, a new series that allows audiences, many of whom are stuck at home during the coronavirus pandemic, to stream 15 newly produced, full-length music and theater performances from stages around the world. Tickets for all performances are $15 for a single viewer, $30 for two viewers and $60 for a household. For UC Berkeley students, tickets are available for just $5.

“It was imperative for us to find a way to bring the performing arts to people at a time when they really needed it,” said Jeremy Geffen, executive and artistic director of Berkeley’s Cal Performances. “The arts, in particular, have the ability to transport us — to take us beyond our quotidian lives into something that is aspirational, something that really is a distillation of the human spirit and something that inspires us at a time when we are sorely pressed for inspiration.”

In June, Cal Performances announced the cancellation of its fall 2020 in-person events, along with most performing arts groups in the country, because of the pandemic. Instead of canceling the season, Geffen said the staff endeavored to find new ways to engage the community and support artists  — a unique challenge they hadn’t before faced.

Instead of trying to replicate the experience of being in a concert hall — something that Geffen said would have been impossible — Cal Performances set out to create a series for the screen that was intimate and approximated a live performance experience, with some enhancements. In addition to free artist talks, interviews and lectures with each performance, educational content will be available to encourage critical thinking, and viewers will have the option to chat with others in the virtual audience.

“We have heard from so many of our community members of all ages about how much they miss performances, both the experience of being in a hall and taking in a work of art and that feeling of unity that they feel with their fellow audience members,” said Geffen. “At a time when we’re not able to be together physically, this allows us at least to share our common experience.”

Cal Performances at Home begins on Oct. 1 with a performance by violinist Tessa Lark and pianist Andrew Armstrong and runs through Jan. 14, 2021. A new video will be released each week, and most will be available to watch for three months after their premieres.