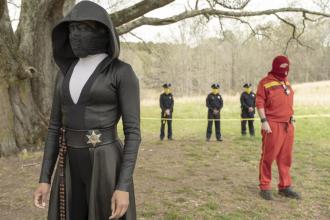 With all eyes on “Watchmen,” its masked heroes and anti-heroes didn’t disappoint.

It was the biggest triumph of a big night for “Watchmen,” the year’s most nominated show.

This was Abdul-Mateen’s first Emmy win, and he took the opportunity to not only give a shout-out to New Orleans where he was born, but the Bay Area. The actor spent several years in Oakland, where he went to high school, and graduated from UC Berkeley before taking a job in San Francisco as a city planner.

“Man, I’m surprised,” Abdul-Mateen said, visibly shaken during his acceptance speech. “Big shout-out to all of West Oakland, all of New Orleans … there’s a lot of people from where I’m from making a lot of noise right now and I love y’all so much.”

The HBO series rebooted and reinvented the acclaimed 1980s graphic novel by Alan Moore about superheroes and vigilantes in an alternate-history dystopia.

“It was a story about police corruption and brutality, but in the midst of all that, it was also the story of a guy who came down to earth to reciprocate to a Black woman all the love that she deserved,” Abdul-Mateen explained of the show. “He’d offer her sacrifice and support. Passion and protection. He did all that in the body of a Black man and I’m so proud that I was able to walk into those shoes.”

“History is mystery,” Lindelof said as he accepted the best limited series Emmy in a remote room with many of his “Watchmen” colleagues behind them. “It is broken into a million puzzle pieces and many are missing, we know where those pieces are but we don’t seek them out because we know finding them will hurt.”

He dedicated the award to the Black victims of the 1921 Tulsa massacre, which has a central role on the show.