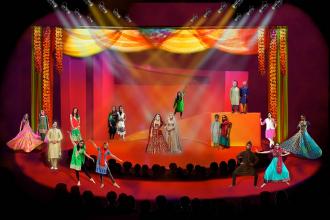 ON APRIL 24, UC Berkeley’s production of Snowflakes, Or Rare White People was supposed to open at the 500-seat Zellerbach Playhouse. In the sci-fi comedy, black and brown women run a far-future America, while two of the last remaining white people are confined to an exhibit at the Museum of Natural History. For the seniors in the cast, it would be their last performance of college, perhaps the last performance—as they were interviewing for jobs in consulting, teaching, marketing—of their lives.

But on Monday, March 9, a week into rehearsals, the play’s director, Mina Morita, came down with a sore throat.

That same day, Berkeley suspended most in-class instruction. The next day, one of Morita’s actors had to fly home to be with her panicking parents. As the week progressed, playhouses across the country began closing their doors, and Morita—who’s also the artistic director of San Francisco’s Crowded Fire Theater Company—was asked by a medical epidemiologist friend working with the San Francisco Department of Public Health to help “humanize” and get out the messaging on Covid-19. "Express vulnerability,” Morita advised. “Acknowledge all of our emotional state, our exhaustion, our confusion, and the connection between our choices and our community well-being.”

With that fractured, frazzled state in mind, she stayed up late scrounging for a way for the show to go on, to keep some kind of “outlet for the creative impulse” during the pandemic. She read a 15,000-word document circulating among the theater community, “Teaching Theatre Online: A Shift in Pedagogy Amidst Coronavirus Outbreak.” She commiserated with other directors abruptly canceling their productions. Then she had an idea. She called Snowflakes’ playwright, Dustin Chinn, quarantined in New York as the city warped into a dystopia possibly worse than his imagined Nueva York, and he quickly gave his blessing: Snowflakes would still premiere—as a radio play.

What’s a radio play? Many of the Gen Z cast members asked themselves. How can you teach acting over Zoom? What do we do with the playwright’s notes? In the script, Chinn writes of Meghan, the female lead: “Her style is super bohemian. It screams brunch … She is the whitest woman anyone has ever seen.” What does the whitest woman ever seen sound like? Where do the chase scenes, flying cars, holograms, tasers, and Bollywood dancing go? Is this even possible? Morita didn’t know. “Thank God it was a comedy,” Morita says. “I don’t think I could do Chekhov during a pandemic.”

On the Monday after they returned from spring break, which for most was nothing more than a scramble on where to quarantine, the cast logged onto Zoom to find Morita with her laptop and her bindered script propped on a shelving unit in her guest bedroom. “All right,” she said, her sore throat gone, “here we go into the great unknown.”