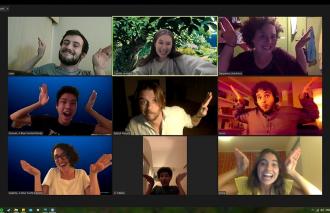 ‘The Nesting Instinct’ is birth of Create4Relief’s charitable works

By
Caitlin Keller, The Daily Cal

Amid the current coronavirus pandemic, widespread social upheaval and the persistent California wildfires, it is deceptively easy for those in the arts to fall into the trap of cynicism, especially with the nagging worry that live theater may never come back. For those who have used the pandemic as an opportunity for growth, however, the time spent in isolation has served as a period of creativity and creation — and, moreover, an opportunity to change the world for the better. The new arts organization Create4Relief, established by Daryanna Lancet and Camilla Leonard, aims to do just that.

Originally starting as just @Create4Relief on Instagram, the organization aims to provide means of helping various social justice and coronavirus relief efforts through creating and appreciating art in all its forms. Now, in an attempt to expand its mission, Create4Relief has partnered with The Actors Space and UC Berkeley’s Play Reading Club to do a staged reading of Tom Bruett’s “The Nesting Instinct.” Raising money for the California Community Wildfire Relief Fund, the production is directed by TDPS lecturer Patrick Russell and features a cast of UC Berkeley students and alumni, pulling in support for the widespread UC Berkeley theater community.

Starting off with Greta Thunberg’s memorable United Nations speech, the event’s fundraising purpose is well punctuated within the themes of the play itself, emphasizing the growing need for urgent environmental action, especially in regards to slowing climate change. As the play follows the intertwined stories of three couples trying to start a family, each storyline underscores the realities of Americans whose lives have been drastically impacted by the detrimental effects of climate change.

After the death of their mother, siblings Olivia (Abril Centurion) and Mateo (Geovany Calderon) struggle to move on with their lives and cope with the decision to sell their mother’s house in the Florida Wetlands. When Olivia finds out she’s pregnant, her and her partner Jason find themselves suddenly unsure of the future of their relationship. Conversely, Mateo and his partner Liam (James Perkins) grapple with their desire for adoption, mirrored by a subplot in which the two blue-footed booby birds that Liam takes care of in the Galapagos are confused by their desire for children as well.

The show succeeds the most when the tightknit ensemble works together. Whether it’s the ensemble’s cohesion in freezing its bodies over Zoom or its emotional closeness in the play’s final scenes, the cast’s ability to coordinate, not to mention its ability to work together to put on a show under unconventional circumstances, truly strengthens its acting. The dynamic between Centurion and Calderon as Olivia and Mateo, respectively, is particularly compelling, as they play off of each other akin to real siblings. Overall, the cast members maintain a sense of connection and authenticity over the show’s Zoom format, striving to connect with one another as much as possible.

For a show about such serious issues, “The Nesting Instinct” also succeeds by remaining easygoing and humorous. Most notably, the scenes between Daphne (Shayna Howlett) and Duncan (Mikee Loria), the two blue-footed booby birds, are some of the most enjoyable. Both actors are able to just let go and be silly, providing a break from the heaviness of dialogue between the human couples. While they still have their share of more heart-wrenching scenes, dealing with the complexities of parenthood and species degradation, the birds are an unexpected yet heartwarming source of comedy amid a more serious show.

Altogether, this production puts in perspective the relentless drive that UC Berkeley students have to produce meaningful art, as well as their capacity to be constantly in tune with what needs changing in the world around them — even creating new charitable organizations in a time of world chaos. While the show isn’t particularly polished, it isn’t intended to be: It serves as a respite from the outside world and an evening of zany student theater, on top of being a way to serve the community rather than a large-scale for-profit production. “The Nesting Instinct” does a great job of debuting Create4Relief’s mission of helping others through art, a wholly respectable aim for a student organization.