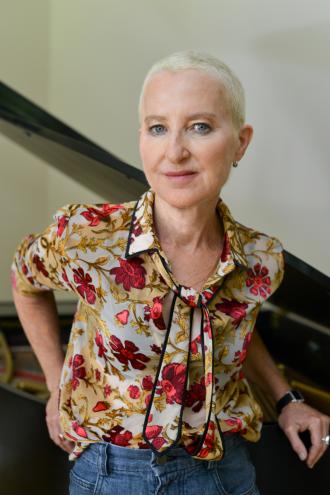 The many fashion-forward hats of Myra Melford

With her ferocious, pummeling keyboard attack, Myra Melford first gained acclaim as the leader of a protean trio, a group that emerged in the late 1980s from New York’s experimental Downtown scene. Over the years she’s built a succession of creatively charged ensembles, but these days her reputation as a composer vies for preeminence with her vaunted skills as a player, bandleader and improviser. And, since becoming a professor of music at UC Berkeley in 2004, she’s steadily expanded her creative purview as an educator and curator. A series of events around Berkeley in the coming weeks capture the many areas in which she’s shaking things up.

Approached by Rob Bailis when he was Cal Performances’ interim director, Melford created a new concert series designed to provide close encounters with some of the contemporary jazz scene’s most creative players. Originally scheduled for October, the first event in the Myra Melford Jazz Platform was cancelled due to PG&E’s power shut off that weekend. The series gets its belated launch Sunday with a double bill featuring two extraordinary duos: pianist Kris Davis with tenor saxophonist Ingrid Laubrock and pianist Matt Mitchell with alto saxophonist Tim Berne. In an intimate twist, the audience joins the musicians seated on stage at Zellerbach Hall.

“My priority is to highlight women and pianists who may not be household names but are becoming increasingly known in New York and Europe,” Melford says. “Originally we were going to do an evening of solo pianists but I didn’t want to leave Ingrid out, so we came up with the idea of two duos, an intimate encounter with the world of creative jazz.”

Kris Davis, 39, arrives in town with some powerful tailwinds. Her 2019 album Diatom Ribbons (Pyroclastic Records), an enthralling series of duo encounters with fellow master improvisers, earned near unanimous critical praise, including being named the best jazz album of 2019 by The New York Times. That project paired her with players with whom she hadn’t previously played with much. Her duo with the German-born Laubrock is a very different animal.

Since meeting in 2008 they’ve performed and recorded together widely, starting in the collective trio Paradoxical Frog with drummer Tyshawn Sorey. Davis plays in Laubrock’s band Anti-House with guitarist Mary Halvorson, and Laubrock plays in the pianist’s quintet, among several other ensembles that bring them together. They recently recorded a duo album that’s slated for release later this year, a project showcasing the way they like to weave free improvisation and through composed passages, “blurring the lines so it’s hard to tell where one starts or ends,” says Davis, who grew up in Calgary, Alberta.

“We just have a real sense of the language that we’ve developed. We have all that history. We’ve written for each other and improvised together. It’s like hearing two people who really know each other have a conversation. In music it’s difficult to keep those relationships going, but with Ingrid it’s been constant.”