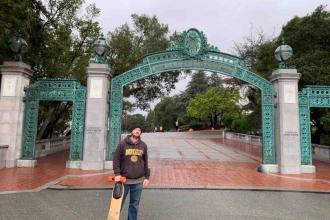 Off the street and into the classroom

By
Elizabeth Costello, Promise of Berkeley

For John Hildenbrand ’19, discovering that he could enroll in college without having an address was a revelation. Homeless for several years after losing his job, he enrolled in community college in his mid-40s. After transferring to Berkeley at age 49, he discovered that his experience could be a starting point for creative and social service projects he will continue long after graduation.

“The best people to help the community are the members of the community,” says Hildenbrand, who studied theater, dance, and performance studies, as well as American studies. He originally thought he would major in sociology, but his mentors persuaded him to pursue performance as a tool for social change. He wrote and performed a one-man play about his unsheltered years in Los Angeles, Restroom for Customers Only.

Stepping into his newest role, Hildenbrand will travel this summer from the Golden Gate Bridge to the Brooklyn Bridge on his electric skateboard. Accompanied by a partner in a van, he hopes to raise awareness about homelessness and his new nonprofit, the Dick Hildenbrand Foundation for Academic Reentry.

“Now is the time to get homeless adults educated,” says Hildenbrand, noting that the foundation, named after his father, will help adults discover resources that can support their transition from the streets to the classroom and beyond. The foundation fills a critical void: Most organizations like it focus on youth. Even Hildenbrand’s theater thesis — “From the Streets of Despair to the Halls of Education” — reflects the journey he seeks to inspire others to take.