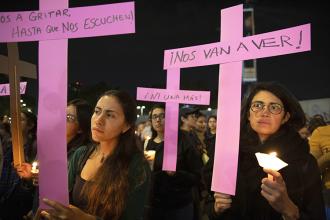 Objects of resistance: Protesting the feminicide of girls and women at the border

The first time that Laila Espinoza crossed the U.S.-Mexico border was as a young girl with her grandmother. “I’ve always been a border crosser,” said Espinoza. “It’s who I am.”

Espinoza grew up in Ciudad Juárez, a border city in Chihuahua, Mexico. As a child, she crossed the border hundreds of times — usually with her grandmother, who worked in El Paso cleaning houses. Every time they walked over the Paso del Norte International Bridge, Espinoza would look over the edge at the Rio Grande rushing below. “When I was child, the river was full — it was very, very alive,” said Espinoza.

She’d see entire families crossing the river — men carrying babies on their shoulders and women with bags on their heads. When the tide was low, they’d be walking. But when it was high, they’d have to swim.

“I remember always asking my grandma, ‘How come they can’t cross the way we do?’ And she would always just tell me the same answer: ‘Because they don’t have papers.’

“Papers or not,” said Espinoza today, “we find ways to cross the border — one that has been artificially imposed upon us and has separated families who have lived in the region for generations, before the wall was built.”

When Espinoza was 13, she was in Juárez, about to cross the bridge with her grandmother, when she stopped. Standing at least 10 feet tall at the entrance of the Paso Del Norte International Bridge was a wooden, magenta cross. Dozens of nails were pounded into the cross, on which little pieces of paper dangled from threads. On each paper was the name of a girl or woman who was missing or had been found murdered in Juárez. “The cross is right at the border,” said Espinoza, “which is just absolutely radical.”

In the months and years that followed, hundreds of magenta crosses began to show up all over Juárez — altars to the growing number of missing and murdered women and girls at the border. The brutal killings would become known as feminicides — a term defined by scholar Marcela Lagarde y de los Rios as gender-based violence characterized by state inaction. Since 1993, some 3,000 girls and women have been reported missing, and more than 600 have been found murdered, in and around Ciudad Juárez, with almost all of the killings going unpunished.

The crosses, along with murals of the missing and murdered girls and women painted on walls throughout the city, are powerful and enduring symbols of resistance, said Espinoza — a way that mothers and families reclaim public space in Ciudad Juárez and make the ongoing feminicides visible, when the government refuses to do so.

“The magenta crosses and the murals of missing and murdered women and girls all over Ciudad Juárez are forms of protest against gender-based violence so prevalent in our culture and so many cultures around the world,” said Espinoza.

As a graduate student in the performance studies program at UC Berkeley, Espinoza began to recognize other forms of resistance that she had been practicing in everyday rituals — rituals like cooking, singing, dancing and sewing — that she performed with her family in her childhood home, an old lime green house affectionately known as “La Casa Verde.”

“By performing rituals and creating altars inside La Casa Verde — by turning La Casa Verde into an altar itself — we are coming together in resistance inside the home as a way to join the resistance and protest throughout the city,” said Espinoza.

It’s also a way, she said, for them to begin to collectively heal from family tragedies that happened decades before — tragedies that no one ever talked about, no matter how many times she asked.