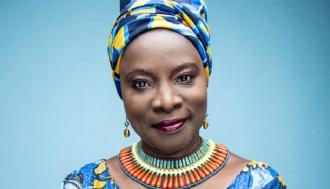 Cal Performances is thrilled to welcome singer, composer, activist, and humanitarian Angélique Kidjo as our first season-long artist-in-residence. Kidjo, an international star and four-time Grammy Award winner, visits the UC Berkeley campus twice this season, performing her unique take on the Talking Heads’ seminal Remain in Light album in the fall, and returning in the spring with Yemandja, a new music-theater production co-commissioned by Cal Performances.

Kidjo is a genre- and border-crossing artist fluent in multiple languages and cultures, who has been honored for her activist work by the World Economic Forum and Amnesty International, and has been recognized by the BBC as “one of the greatest artists in international music today.” In all her work, the French-Beninese singer makes connections between contemporary issues and African musical traditions, and probes the past for lessons on improving the future.

During her campus visits, Kidjo will work closely with students, faculty, and a host of campus partners as part of a series of academic encounters and public programs that engage topics close to her heart, including the issue of equity in the fields of technology and data.

"Kidjo, Cal Performances’ artist-in-residence for the 2021–22 season, is an omnivorous artist with a gift for assimilating a wide range of music into a sound that is completely her own, always infused with her powerfully positive message. Here, she connects with the album’s original Afropop influences and filters its new-wave sensibility through her own musical interests—which span the African continent—mining the songs for topics that resonate with her today and adding her own lyrics in languages from her home country of Benin. Kidjo’s singing is euphoric, soaring over layers of backing vocals, explosive percussion, and driving horn orchestrations to transform classic songs such as “Crosseyed and Painless,” “Once in a Lifetime,” and “Born Under Punches (The Heat Goes On).”

“Remain in Light feels like an album that Kidjo was born to sing; never has she sounded so convincing, so powerful” (Songlines)."