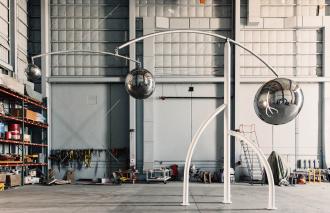 By
Ashley Tsai, The Daily Cal

Rbhu, an engineering company created by a UC Berkeley alumnus that specializes in large scale artwork and entertainment sculptures, is launching a new round of grants to donate to artists.

Rbhu Gives Back is a grant-giving program aimed toward realizing the visions of creators in need, according to Alireza Lahijanian, co-founder of Rbhu. This year, Rbhu plans to donate grants in varying amounts to four different community artists amounting to a total of $15,000.

“We believe that art sculptures are very important to inspire people, ignite creativity and have a positive impact on the health and well-being of people,” Lahijanian said. “We feel like this is our way of giving back.”

Winners of Rbhu Gives Back grants are selected through an application process that details a project’s visual concept, Lahijanian added.

The artists work closely with the Rbhu engineers to fulfill both a project’s artistic and structural needs, according to the Rbhu website. The program focuses on encouraging an artist and aids the complete growth of a full-scale engineering project.

Solar Portals was a 2019 grant winning project by David Cole and Michael Brown. In May, it was installed at Orchard Elementary School in Richland, Washington after two years of development, according to Cole and the Rbhu website.

Cole described how Rbhu facilitated and supported their mission through the process.

“(Rbhu) were like life-savers. They completely rose to the task, and we didn’t feel like we were a second-class job,” Cole said. “They treated us just like they would any other full-paying client.”

Lahijanian and co-founder Selinda Martinez were heavily involved in engineering volunteer work before launching Rbhu, according to Lahijanian. Throughout their volunteer experience, they collaborated with several different artists and realized they wanted to pursue this engineering path, Lahijanian noted.

Since its founding in 2014, Rbhu has engineered more than 150 art sculptures.

The idea to start their grant program sparked in 2019, according to Lahijanian. One of their first selected projects, Transportapueblos: The Resilientes, also known as the Coyote Project, ultimately kicked off the program, and Lahijanian said Rbhu aims to continue this program in a self-sustainable way.

The philosophy of Rbhu lies in giving back, which remains a high priority for Lahijanian. He noted that much of his desire to service artists in need is due to his work on the Coyote Project.

Looking ahead, Lahijanian said Rbhu hopes to spread the word about its services and reach people who need the funds to make their projects come to life.

“It’s a great opportunity for artists to be able to have these services,” said Ellie Sass, digital brand manager at Rbhu. “You don’t see many engineering firms offering to do pro-bono.”