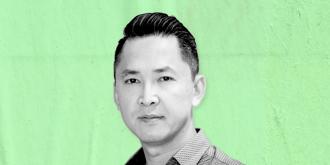 Viet Thanh Nguyen's life changed when he won the Pulitzer Prize for fiction in 2016 for his startling debut novel, "The Sympathizer." In recent years, Nguyen, the hypervisible Aerol Arnold Chair of English at the University of Southern California, became a contributing opinion writer for The New York Times, received a MacArthur Fellowship (commonly known as the "genius grant"), gave countless talks around the country and even appeared on "Late Night with Seth Meyers."

His latest achievement is one for the history books: Nguyen has joined the Pulitzer Prize Board as the first Asian American member in its 103-year history. The trailblazing author will serve a three-year term that's renewable twice, up to nine years.

"They had asked me for a couple of years prior to this, and I just couldn't do it, because I was involved with a lot of work and also desperately trying to finish the sequel to 'The Sympathizer,'" said Nguyen, 49.

"When they came back a few months ago and asked me, I had just finished the novel," titled "The Committed," he said. "I take the idea of citizenship seriously, whether it's service to the country or service to literature and Asian Americans, so I had to say yes."

R.O. Kwon, the bestselling author of "The Incendiaries," said that it shouldn't have taken this long for the Pulitzer Prize Board to include an Asian American but that now that it has, she is thrilled. "I think it's wonderful, and lucky us — Viet is a brilliant, groundbreaking writer and a stalwart champion of marginalized voices," she said. "He opens doors and keeps them wide open for others."

Times have changed since Nguyen's graduate school days at the University of California, Berkeley, where his department chair told him he couldn't write his dissertation on Vietnamese American literature because he'd never find a job. He broadened his research to Asian American literature, instead.

His first book, "Race and Resistance: Literature and Politics in Asian America," published in 2002, examined Asian American literature starting with Onoto Watanna in 1896 and ending with Lois-Ann Yamanaka in 1996.

Nguyen recalled how he used to be able to keep up with all of the literature written by Asian Americans, but now he finds it impossible thanks to a recent explosion of poetry, novels and memoir.

"In all the realms of artistic productions in this country, it's really in literature that Asian Americans have been the most prolific and successful," said Nguyen, who wrote the nonfiction book "Nothing Ever Dies: Vietnam and the Memory of War" and a short story collection, "The Refugees."

He also edited "The Displaced," featuring 17 essays by refugee writers, and he most recently co-wrote the children's book "Chicken of the Sea" with his son, Ellison Nguyen, then 5.

He said that even though the publishing industry remains predominantly white, Asian Americans have found success in literature in part because it's a low-cost art form to break into.

"The more expensive an art form gets, the more difficult it is for those who are excluded to break in," he said. "That's why you have Hollywood, which is the most resistant to change and most susceptible to prejudice against Asian American stories, whereas in literature, especially poetry, the least expensive of the literary arts, is where the excluded get to have their chance. Because anybody can just write."

He believes the burden of representation Asian American authors once felt isn't as heavy for today's writers, which allows for greater eccentricity and experimentation. Nguyen said his own fiction had the benefit of being published after Vietnamese American literature had "had a couple of decades to really develop."

"The Sympathizer," which was released in 2015 to coincide with the 40th anniversary of the end of the Vietnam War, dealt with the U.S. role in Vietnam and featured a nameless half-Vietnamese, half-French narrator working as a double agent in the aftermath of the war.

The highly anticipated sequel picks up where the multi-award-winning novel left off. "The Committed," a literary thriller set in Paris, will be published in March.

"I thought it would be crucial to investigate and interrogate what the French did in Vietnam, because France and the U.S. were two of the major colonizing powers in the last century," he said, "and their visions of democracy and liberty and freedom and so on have been crucial, certainly, in my life and determining the fate of so many people in so many countries."

He came to the U.S. in 1975 with his family as a 4-year-old refugee and was initially settled in a camp in Fort Indiantown Gap, Pennsylvania. They were separated and lived with American sponsors for a few months before reuniting to move to San Jose, California, where his parents opened one of the first Vietnamese grocery stores in the city.

Nguyen's parents worked grueling hours year-round and were shot and wounded during an armed robbery at their store on Christmas Eve. When he was a teenager, his family were victims of an attempted home invasion in which the intruder pointed a gun in all of their faces.

By the time Nguyen was an undergraduate student at Berkeley, where he later received a doctorate in English, he was dedicated to social justice and wrote op-eds for the campus newspaper.

"I was always outspoken," he said. "The book just gave me a bigger platform to say everything I was always saying."

As a cultural critic, he covers everything from stereotypical representation in Hollywood to the government response to Covid-19 and even his own community when warranted.

"If Asian Americans are on the side of injustice, our job is to criticize our own community."