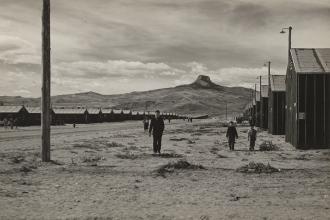 The dust howls, or else settles on everything like morning dew.

The sun burns first, then lashes from the wind. There are eight toilets and eight showers to accommodate hundreds. The food, endless cans like dog food, will not go down.

“We had to live like slum dwellers,” writes Yoshiko Uchida — a senior at UC Berkeley at the time of the expulsion — in a 1942 letter, recalling life in the horse stables of the Tanforan racetrack. Toilet paper and warm water were rare, the latrines were unsanitary, and privacy was nonexistent.

In the spring of 1942, approximately 120,000 Japanese Americans were banished from their homes, shuffled into squalid detainment centers as internment camps were built. Uchida’s letter is one of thousands held in The Bancroft Library, where the memory of a national shame lives on.

“Some day, some time, some other may want to read this,” Uchida writes, “these notes of an event which has never before happened and which I hope cannot and will not ever happen again to any other group of people.”

But today, more than 75 years later, new images come to mind: a young immigrant child crying for her parents; tinfoil blankets on a hard floor; refugees on the border packed into cages like fish in a net.

“I said probably 10,000 times that the reason we’re doing this is to prevent it from happening again,” says John Tateishi ’65, a UC Berkeley alum who in the late ’70s led the national redress campaign for Japanese Americans, which culminated in a national apology and reparations for those who had been detained. “I never thought it would actually come to that,” he says.

(This week — on the 78th anniversary of the executive order authorizing Japanese Americans’ internment — the California Legislature passed a resolution to formally apologize for the state’s role in this dark chapter in America’s history.)

Sharing eye-opening records of the tragedy far and wide, the Library has now digitized more than 500,000 materials on Japanese internment, including firsthand accounts and government records. Behind those documents is a tale of evil justified — and what it took to get there.

“The materials we have we consider as evidence,” says Mary Elings, Bancroft’s head of technical services, who has overseen the digitization of Bancroft’s collection of internment-related materials. “It’s part of our job as citizens to understand from where we came so we can hopefully improve where we’re going.”