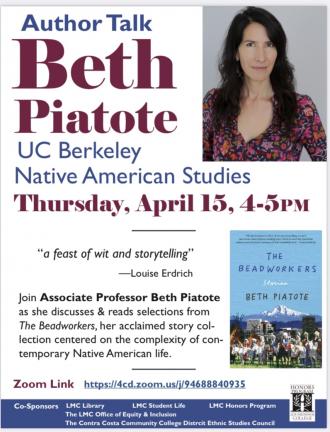 In “The Beadworkers” and In Life, Author Beth Piatote Seeks to Resurrect Indigenous Language

Indigenous language revival is a phrase that the author and UC Berkeley professor of Native American Studies, Beth Piatote, holds a passion for. It is also one that she says has gained momentum in recent years.

In a virtual talk to Diablo Valley College on April 15, Piatote discussed her new book The Beadworkers (Counterpoint Press, 2020), a collection of stories focusing on many aspects of contemporary Native American life. In it, she explores a mix of writing genres and narratives that reveal indigenous peoples’ commitment to creating art, telling stories and sharing experiences.

“It was kind of a playground for me to kind of play with these different forms,” Piatote explained. “It’s important to let things be what they are” when it comes to different styles of writing.

Guiding her project was “[the] sense that you are obligated to be your most powerful self,” a belief that she said has helped the Native American community survive through the centuries.

For Piatote, it was important to convey the deep connections that drive Indigenous peoples in their search to heal and bring beauty to the world, aided with the help of their ancestors. Beadworkers, protest leaders, hunters, fishers: in indigenous culture, she said, each person has a role helping the greater whole survive. The Native belief is that every person’s unique gift is their responsibility, given to them by the Creator.

With The Beadworkers, Piatote gives voice to those figures in the background of society who are keeping Native American arts growing while sustaining their communities. “I wanted the focus to be on them, too,” she said. The book’s cover art – a beaded panel by Marcus Amerman, titled “The Gathering,” currently on display at the Portland Art Museum – echoes the style of her writing: multi-layered, a combination of genres.

In addition to writing stories and teaching at Berkeley, Piatote is a poet and playwright. She is a member of the Nez Perce Tribe and enrolled in the Colville Confederated Tribes of the northwestern U.S.

Piatote, who grew up on a farm in Idaho, said her life has been shaped by “a circuit” of relatives spread throughout the Pacific Northwest. Although she still considers the Idaho farm her home, “I [also] think of the characters in the book… as home to me,” Piatote said.

Someone who sees herself attuned to intuition and desires, and who retains a keen interest in learning new things, Piatote is a part of her tribe’s creative writing collective helping aid its language revitalization. Her heritage language is Nez Perce, elements of which are featured in The Beadworkers. Piatote said that in her tribe, the heart is considered the true center of knowledge.

During the talk, Piatote read excerpts from the book, including “Feast One,” the opening poem of the collection. It featured Indigenous terms for water and various animals. Piatote pointed out that the structure of Indigenous language differs from English in that it is polysynthetic – consisting of long, highly structured words with many parts – and especially verb-based. “It’s a great adventure to learn this language,” she said.

Despite America’s history of genocide, forced assimilation and the placement of Indigenous children into boarding schools where they were forced to speak English, Indigenous communities have found ways to sustain their languages. Piatote drew attention to the Breath of Life Institute hosted by UC Berkeley, a workshop that focuses on helping Indigenous people research, learn and revitalize their native language.

Piatote described the process as “waking up languages,” which she said has been successful in California where universities have a wealth of recordings and written documents to refer to.

She praised the many contemporary creative writers who are working in their Indigenous languages, and particularly recommended readers to explore Maori poet Robert Sullivan of New Zealand.

In sharing her experiences, Piatote offered advice for those who may not yet know which major or career path they want to pursue. In her own life, keeping faith that a career option would present itself, she said, kept her going. Getting by and depending upon herself – whether it involved growing fruit or waiting tables – meant that she was “never afraid of failure.”

“Hacking through the brush, finding little trails, but you do get there,” she said.

Piatote urged aspiring writers to keep writing and developing their own voice. Taking writing workshops, attending talks, sending out work for publication, and continually reading are all habits she urged young people to adopt.

“Follow writers whose life force is so alive that they make you want to write.”