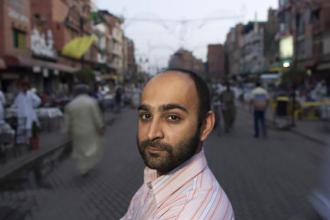 ‘Exit West’ author Mohsin Hamid: ‘Migration is what our species does’

Imagine a reality where migration didn’t involve a journey, and instead, anyone could simply walk through a door and be in another country. That’s what author Mohsin Hamid does in Exit West, his 2017 novel that tells the story of two characters — Saeed and Nadia — who meet and fall in love as their country breaks out in a civil war. After discovering that magic doors are popping up throughout their city that could transport them to a different country, the couple decide to leave their home and forge a new life together in an unknown place.

As part of On the Same Page, a program of UC Berkeley’s College of Letters and Science, all 8,700 incoming first-year and transfer students got a copy of the novel to read over the summer, so when they started at Berkeley in the fall, albeit virtually, they would have something in common to talk about — socially, in classes and at events designed to explore the book’s themes.

Berkeley News caught up with Hamid after he delivered his virtual keynote speech to the Berkeley community from Lahore, Pakistan, where he was born and has spent about half of his life. In the following Q&A, he discusses the sacrifices and beauty of migration, and how the human need to move around the world is an opportunity for us all to build something new, together.

Watch a video of the keynote on the College of Letters and Science website.